'Clan' Gunn
Hendersons, Mansons, Thomas Henderson botanist, Land Ownership in Caithness and Sutherland; Thomas Sinclair’s ‘Clan Gunn Supplement 23’, 19 May 1903
REVIEW
This is a somewhat curious Supplement with a focus on Hendersons and Mansons. It has a detailed amount of who owned which land and it has a useful life of Thomas Henderson, early botanist of Caithness and Sutherland. There is some useful genealogy.

KEY PEOPLE / PLACES / PHRASING
·        Robert Dick, Thurso and Clackmannanshire of geology and botany fame. But Thomas Henderson b. 1849, Lieurary School worked hard in geology, astronomy and especially botany. D. 13 November 1890 ‘A sympathetic monograph appeared in the Northern Ensign  written by the author of The Flora of Caithness, J. F. Grant. Discussion of the flower in the  badge of the Gunns. In 1888 Henderson and Grant went plant hunting in Reay, together. Henderson found many previously unknown plants in Caithness and Sutherlandshire (and obviously other rare plants). Ben Griam. Henderson made the first known list of Caithness plants. Much admired. Died aged 41. Buried at Trostan, near Millfield House, in Milton of Lieurary.
·        Andrew Henderson wrote a biography of the Duke of Sutherland in 1765 and other works, but whether he was a ‘Gunn’ Henderson is not known
·        THE WILLIAMSONS. Were they descended from George Gunn the Coroner or from the Mackays? Worth noting that Andrew Williamson of Achorlie had a feu-charter in 1665 and was buried in the Gunns of Spittal graveyeard; coincidence or proof?  His son Donald was a merchant-bailie of Thurso in 1691-1692 and bought Banniskirk (which included Achorlie). His wife was Catherine Rorison, sister of Bailie Alexander Rorison of Thurso. But there are earlier notices of Donald; 7 December 1677 Donald Williamson had possession of a pennyland at Achorlie, 1 April 1681 Catherine Rorison had  possession of Achorlie (presumably her  husband  was dead), Jean Williamson, Alexander Boynd, Donald Harper Thurso, Elizabeth Williamson, Alexander Macphail, Andrew Gunn, 1692 the same Andrew Gunn presented a sasine for Donald Williamson merchant Thurso on Banniskirk, (quite a bit on Williamson of Banniskirk), Benjamin Williamson (son) married Elizabeth Sutherland of the Langwell family, their only  son  Donald the third laird. He married Elizabeth Ramsay, daughter of a Dundee merchant and had 5 sons and 4 daughters. The eldest was Colonel Benjamin Williamson of Banniskirk. His 2 sons were Captain James Williamson and Major John Williamson, both died in the Peninsular war of Spain about 1812.
·        Colonel Wemyss Williamson and Benjamin Williamson Younger of Banniskirk as husbands of  Harpsdale’s daughters Henrietta and Janet of Southdun... Donald of Baniskirk 1789 had sasine, probably for bonds, on Brawlbin, Assery, Duncansbay, Stemster, Wares, Smiddies and Gills... His second son James ... Lieutenant – Colonel Benjamin Williamson of the Caithness Highlanders (had Banniskirk and Achorlie)... His wife Janet Sinclair gave a bond to Alex. Henderson of Stemster on her estates of Scarmclett, Larel, Gelshfield, and Clayock... Southdun... Alexander Williamson... George Douglas... William Wilson / Williamson... Finlay Ross Thurso... Captain Thomas Fraser HEICS ... Williamsons were therefore for a time out of Banniskirk... James Williamson... Lynegar, Duncansby, Dunnet, Marlefield, Bowertower, Bains, Peter Keith merchant Thurso...
·        MANSONS. An account of a Watten family who achieved mainly military distinction in India and abroad (!) who married into minor county families... Alexander Manson merchant MP for Wick 1681, 1685 and 1693 for the County ... Bridgend in Watten... Earl of Breadalabane... the hated ‘Glenorchy’... adding Flex, the Bains patrimony and Coghill in 1698 to his Watten lands. His wife was Isabella Hay... son George succeeded to Bridgend...the second and last Manson Laird as he had 3 daughters, by marriage of Sidney, of whom Bridgend went to Barrock Sinclair... 23 March 1687 has a Coghill as the wife then of ‘Alexander Manson, bailie, Wick’ but he may have been twice married... Magnusson ... Mans or Manse being the Canisbay pronunciation of Magnus... 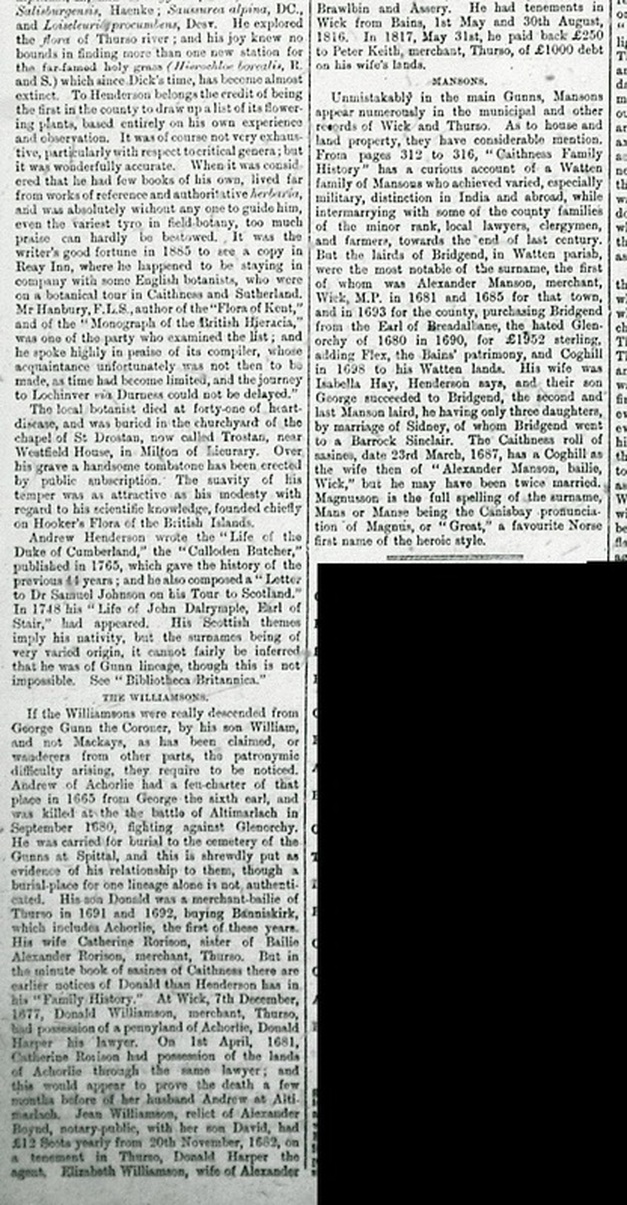