Be aware the graphs below do not have the same scale. 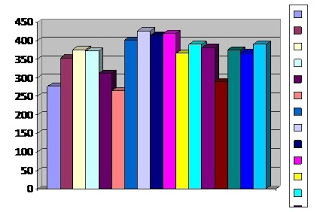 Overall CGSUK members 1962-1995
The CGSUK website accessed 23 September 2014 http://www.clangunnsociety.org/about-us/
records over 300 families as members which is suggestive of a society struggling to maintain membership. 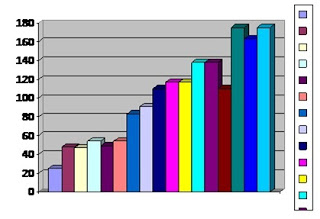 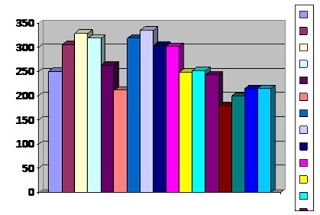 This analysis is based on data (Membership Lists) issued by the Clan Gunn Society in the UK to all its members.  The numbers are approximate but as accurate as I could manage. I note the Membership Lists may well have been inaccurate.  As well, the list formats changed over the years; sometimes everyone was uniquely recorded, in other years families were bunched on the same line which makes accurate counting awkward.  In a few instances full addresses were not given.  And, of course, I may simply have miscounted. I have included the Channel Islands, and the Isle of Man, members as ‘UK members’ which I recognise can be questioned.  The chart ends in 1995 as that is where my data stops as presumably the 1998 UK Data Protection Act was noticed.[1] Actual numbers can be found here - http://clangunn1.blogspot.co.uk/2012/04/clan-gunn-society-uk-membership-list.html

What is important are the overall trends in the period 1962-1995, namely

UK membership of the Clan Gunn Society shows a decline. For the period 1979-1995 membership was roughly equal to or below the number of members in the original year of the Society. That’s an awkward position.

Overseas membership of the UK society is crucial as it shows, overall, strong growth.

The consequence of these trends is that worldwide UK membership is basically steady after an initial growth in the early years. Holding steady membership is not ideal for any society.

Overall numbers of members remain very small. A quick check on ‘ancestry.co.uk’ shows nearly two and half million records held for Gunn in the Family Tree sections (obviously with duplication) which shows an enormous amount of people working on Gunn genealogy. This ‘ancestry’ figure towers over the roughly four hundred people of the Clan Gunn Society UK so the argument that the Clan Gunn Society UK is the real voice of the Gunns seems rather thin. (I recognise I am comparing 1995 with a 2012 figure, but my point is valid due to the massive difference in numbers.)

One has to think that the UK Clan Gunn Society needs to examine its approach as a Society if these trends have continued. Has anything changed in its style and approach since 1995? Or 1962?

I note that the CGS North America membership numbers dropped to 897 members in 2011 http://www.clangunn.us/SaluteArchive.htm which is a very impressive figure. GCSNA 2014 AGM notes membership of 1114 against 873  'a year ago' but 'we need to get younger people interested.' So, membership is holding up well - although with a large swing - but young people seem not to be involved. Perhaps because they are less interested in the mythic past?

I note that the Newsletter CGSNA - Eastern Canada Branch Spring 2014 makes the following comment about CGSNA membership  'So far in 2014, we do not have any new members ... Overall, our  branch membership is down ... The Membership Secretary reported at the September 2013 AGM of CGSNA in Pleasanton, California that the Society had 873 members - down from 1,100, in 2012.'