Contents and Introduction of 'The Gunns: History, Myths and Genealogy'

The Gunns:
History, Myths and Genealogy

​The individual chapters can be downloaded as pdfs from latrobe.academia.edu/AlastairGunn


The most interesting part of the Scots’ nation is the Highlanders,
the descendants of the aboriginal Celts[1]


My fathers were Highlanders long ago…[3]

For Wendy, with much love.


First printing 2019. Copyright © Alastair Gunn 2019. Alastair Gunn hereby asserts and gives notice of his right under Section 77 of the Copyright, Designs and Patents Act 1988 to be identified as the author of this work. All rights reserved. This book or any portion thereof may not be reproduced or used in any manner whatsoever without the express written permission of the publisher (Alastair Gunn) except for the use of brief quotations in a book review or scholarly journal.

This book is a print on demand book; it is possible that significant new information could be found which means I could produce a revised version of this text and perhaps even a second edition. 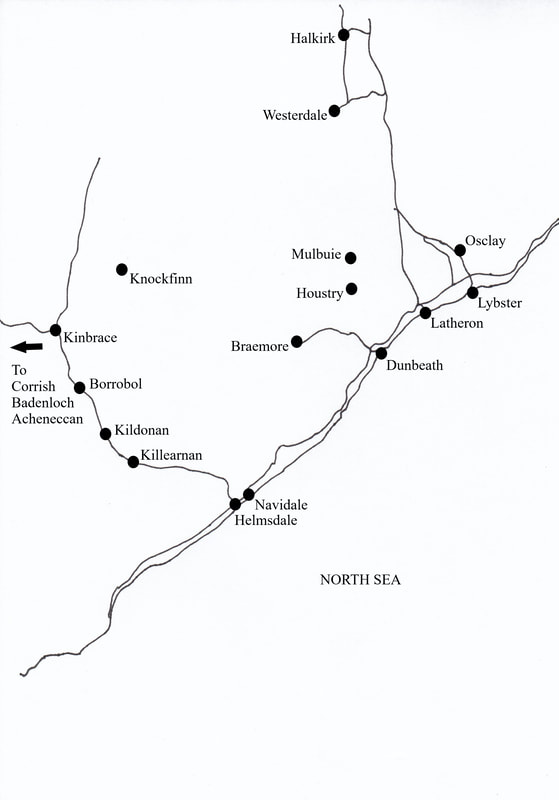 ​Some key places in Gunn history.

It is, of course, a fine thing to seek Scottish ancestry, and engaging with all aspects of Scottish history and culture is to be encouraged – but it must be done in the full knowledge that much of the mythology about clans, surnames, tartans and the like is just that...[4]

In the early nineteenth century, nostalgia for a vanished age led to the revival or reinvention of Scottish ‘tradition’, a strand of folklore whose blend of the authentic and the bogus to this day affects perceptions of the country’s history…[5]

I have been interested in Gunn history for many decades not least as it was of importance within my family for many generations; assorted primary source material starting from before the Highland Clearances had been kept and many family trees created. When I was young the heroic Gunn ‘history’ was appealing but so were stories of giants and tigers and fairies at the bottom of the garden. With age I needed more; what academic evidence was there for the Gunn stories? The more I looked the more the supposed facts crumbled.

So this text is the result – it is as factual as I can make it however it is not the final answer. Although I have worked on the Sutherland Estate[6] papers in the National Library of Scotland I have not read all the relevant documents, one reason being that my knowledge of 1600s-1700s Latin is nil. And I am sure some Estate papers will have been wrongly filed.  The next person exploring those documents could start by tidying up exactly when Gunns – and which Gunns - ‘owned’ Killernan, Borrobol and Navidale as I have not been able to tie down the exact years. And I strongly suspect that some Learable Gunns have a MacHamish (see chapter 10) link but I have not been able to solve that problem.

Much Scottish clan history is just Victorian mythologising[7] created by the cultural power of people such as Sir Walter Scott[8], and much Gunn ‘history’ is an example of this tendency. The first two Gunn books – namely Thomas Sinclair’s The Gunns and Mark Rugg Gunn’s History of the Clan Gunn – implicitly supported this mythological approach by regularly blurring actual events and people with legends and the historically impossible (which includes events wrongly attributed to particular Gunns). This text’s factual base will cause a problem for the myth believers who accept those books.

The key book for early Gunn facts is Sir Robert Gordon’s A Genealogical History of the Earldom of Sutherland[9] – he lived from 1580 to c.1650.  It’s really a history of Sutherland and Caithness with a solid dose of his family’s genealogy. His account stopped in 1630 so it is reasonable to assume that he wrote the manuscript about then. For Gunns the point is simple – Gordon’s Scottish facts should overall[10] be accepted as he was the person closest to the time and tried to write the truth as it was known. Later versions of events which embellish Gordon’s text should be ignored, but Gordon was reliant on oral accounts so occasionally his events can be questioned where they lack logic.

I have paid little attention to Gunn history beyond the 1800s[11] as for most Gunns their known, actual family history starts around that time. Gunns are, by origin, best viewed as a non-related tribe and are not a clan as I discuss in the first four chapters. This means that Gunns share a surname but rarely anything more[12] bar with known family members; to Gunns reading this text, unless you can demonstrate by supported genealogy do not assume that anybody mentioned in this volume shares any close relationship with you.

But this Gunn history is my family[13] history, see Appendices 1 and 2.

There are terminological problems associated with Gunn history.
Firstly, there is the Anglicisation / ethnic cleansing issue. The original Pictish / Celtic Gunns of northern mainland Scotland are hidden from history as they were replaced by the mythic Norse origin which gives Gunns white skins and blue-eyes. Coroner (of Caithness) Gunn – the first recorded Gunn in history - is often given the name George for no reason and his descendants[14] lose their Celtic names and become James or William, and so on. I have reluctantly decided to use Anglicised names (but not invented names such as George for the Coroner) as by doing so it is easier for readers to relate to earlier versions of Gunn history.

Secondly there are terms which have Scottish meanings which have not travelled elsewhere. The main two are –

Wadset / tack. A wadset was basically when a person paid the rent upfront for an estate for a set period of many years. The wadsetter could then charge rent from lesser people / farms on the estate to help with the cost of running the property. At the end of the agreed period the real owner had to return the original money within a set period (suggestions range from immediately[15] to forty years) or the wadsetter could keep the land.[16] Progressively wadsets fell out of favour and tacks replaced them. A tack is essentially a lease of an Estate with rent paid each year.

Historically the Gunns did not own land; land was owned by people like the Earl of Sutherland or the Earl of Caithness. Wealthy Gunns had wadsets of Estates from such people. The actual Gunn(s) who had the wadset were ‘of the Estate’; the rest of his family who lived there were ‘in the Estate’. So a ‘Gunn of Killernan’ was significantly more important than a ‘Gunn in Killernan’.

Coroner. Coroner Gunn was an important man but the Scottish position of Coroner does not match English or American coroners. I discuss the position in detail in chapter 8.1.

Finally, there are words (mainly place names and people) which have had varied spellings over the years; there are many. A few examples are Killernan / Kilearnan, Beag / Bheg, Mhor / Mor, Borrobol / Borobol, Snaekol / Snaekoll, Crotach / Croitach, Knockfinn / Knockfin and Achanakin / Acheneccan / Achneakans.[17] In most cases any usage or all usages are sound, given that soundness I have merely aimed for consistent usage except where I am quoting from a text.

[1] Page xxi, James Logan, The Scottish Gael, Volume 1.
[2] Page 173, Thomas Smibert, The Clans of the Highlands of Scotland.
[3] Les Murray, from ‘Four Gaelic Poems’ in Collected Poems.
[4] Dr Bruce Durie, ‘What is a Clan’ http://www.bletherskite.net/2013/10/04/what-is-a-clan-by-dr-bruce-durie/#comment-21492  accessed 1 May 2014.
[5] Page 8, J. Westwood and S. Kingshill, The Lore of Scotland A Guide to Scottish Legends.
[6] Mark Rugg Gunn points out these papers had not been looked at by him, see his page 7, History of the Clan Gunn.
[7] See http://www.napoleon-series.org/research/society/c_scottishidentity.html accessed 30 December 2012 for a discussion of this issue. One writer views the result of this mythologising as ‘clanland’ see page 128 Paul Basu Highland Homecomings: Genealogy And Heritage Tourism in the Scottish Diaspora. It can be argued that to be a member of a Clan Society requires a quasi-religious ‘leap of faith’ to accept the myths which a Society views as ‘history’ – and, like with religions, the people of the faith dislike analysis of their belief system. For more analysis of ‘heritage mythology’ as religion see pp. 200-203 Prof. Celeste Ray, Highland Heritage; Scottish Americans in the American South.
[8] ...‘the central dilemma of the Scottish historian: how to reconcile the legacy of Scott and the romantic movement with the methods, practices and concerns of history in today’s world’ - pages 17-18,  Mathew H. Hammond, ‘Ethnicity and Writing of Medieval Scottish History’ in The Scotish Historical Review Volume 85 Number 1, No. 219.’The Scottification of Scottishness’ is Celeste Ray’s term. See page 29 ibid.
[9] Page 43, Mark Rugg Gunn, Clan Gunn says ‘We owe him a debt of gratitude for much of the local history would have been unrecorded but for his pen, and he lived near enough to the times to be to be able to paint a colourful and in the main accurate picture’.
[10] One can also occasionally question what Gordon wrote as events may have been shaped by retelling, the odd primary source may have been found since his time and he had a tendency to place his family in the best possible light.
[11] The modern ‘Clan Gunn Chief’ issue I discuss in Appendix 7.
[12] Celeste Ray in her Highland Heritage, page 80, writes that ‘clan names confirm belief in one’s kinship within the community and integrates clan history within one’s own perception of self and identity’; in other words, some people get self image by knowing they might be related to famous people.
[13] My father pursued a claim to be ‘Chief of the Clan Gunn’ from the late 1960s to the 1980s; this book shows his action was appropriate in that my family is the most senior living known line from Coroner Gunn which has always held the surname Gunn. But, as also discussed in this text, the idea of a ‘Clan Gunn Chief’ is just just wrong.
[14] The senior descendant line from Coroner Gunn is the ‘MacHamish’ line; that term is also an Anglicisation. See page 6 in my Key Issues for a Clan Gunn history for the early use of the word.
[15] Page 320, Earl of Cromartie, A Highland History.
[16] Drawn from Page xxii ed. R.J. Adam, Sutherland Estate Management 1802-1816, Volume 1.
[17] This spelling is in use in 1812. See page 103, ed. R.J. Adam, Sutherland Estate Management 1802-1816, Volume 1.
Powered by