​The individual chapters can be downloaded as pdfs from latrobe.academia.edu/AlastairGunn

With Coroner Gunn we have the start of Gunn history and also the start of the complex, often confused early Gunn genealogy.  Such genealogy has generated much controversy so before looking at Gunn genealogical details it is worth considering the qualities of the various genealogical material on offer. There are two areas to assess –

The key is the 1896 tree of Captain Alexander Gunn who was the son of Catherine ‘Osclay’ Gunn (12,38) and Donald ‘Braehour & Brawlbin’ Gunn (13,65). Note the numbers after their names as the first number indicates the generation of MacHamish they were – MacHamish being the eldest son of Coroner Gunn and consequently the ‘Clan Gunn Chief line’ for the myth believers – and the second number shows seniority.  The numbering issue is more fully discussed in chapter 10.2.

Captain Gunn, Braehour … is admitted to be, if not the greatest, at least a genuine, living authority on Gunn questions … It were strange if the captain had not been well posted up in all historic points, seeing that his father, Donald Gunn, Braehour, was the acknowledged sennachy or historian of his time … an unusually learned sennachy.

The 1896 tree by Captain Alexander Gunn was not in existence when Thomas Sinclair’s The Gunns was written nor was it discussed when Mark Rugg Gunn’s book was written. For some reason Captain Gunn’s tree has been largely - totally? - ignored in Gunn genealogical discussion. It has some obvious errors (it’s huge, so mistakes will happen) but that does not mean all of its information should be ignored, especially on that which relates to the Captain’s family especially as some key parts are backed up by Sutherland Estate papers and the National Records of Scotland.

It is important to note the positions held by Captain Alexander Gunn and his father Donald Gunn (Braehour) (13,65) – they were the accepted historians / genealogists of their time. Given these positions, it is extremely unlikely that Captain Gunn would not accurately record his immediate family.

And what Captain Gunn’s tree shows of his close family is crucial to the Gunn story as Captain Gunn’s great grandmother was Margaret (10,23) who was the sister of ‘Chief’ Alexander Gunn (10,19) and she was therefore the daughter of ‘Chief’ Donald ‘Crotach’ Gunn (9,15). Margaret was therefore also the aunt of the last two ‘Chiefs’ William and Morrison (generation 11 with no second number as neither had children). (Was Morrison ever a ‘Chief’? We do not know as Morrison’s death date is obscure. See his life in the next chapter.) Margaret (10,23) married John Gunn in Kinbrace (12,54) who was also descended from the Coroner.

The 1896 tree also shows that the Gunns of Osclay are descendants of Margaret Gunn (10,23) and John Gunn in Kinbrace (12,54). See Appendices 1 and 2 which show that the descendants of ‘Osclay’ Gunns still exist.  As such, the senior MacHamish line is not extinct. 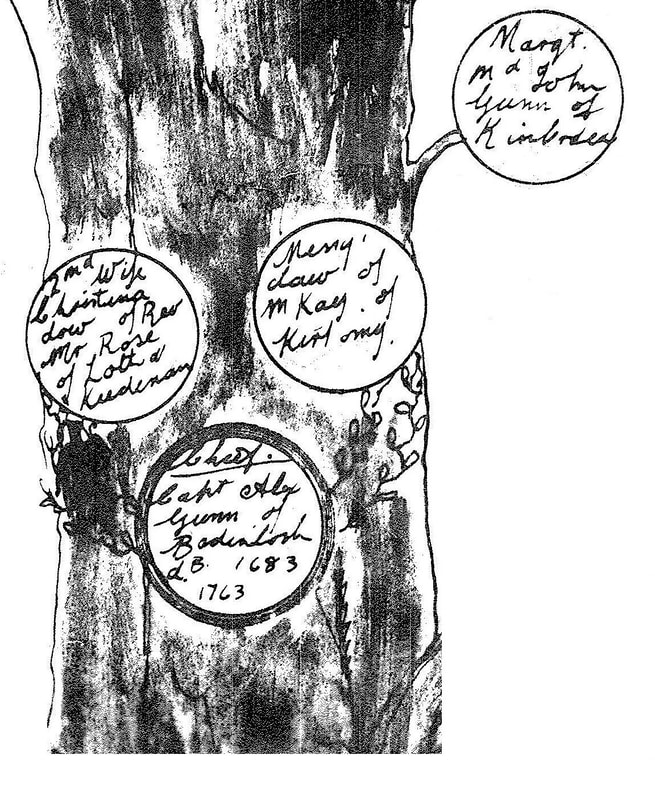 This part of the 1896 tree is ‘living memory’ genealogy – as said, Margaret Gunn (10,23) was Captain Gunn’s great-grandmother. Captain Alexander Gunn’s tree is also accurate on the earlier three generations before his great-grandfather, in that the names he offers exactly match Sutherland Estate documents.[1]  Given these more distant generations accurately show Kinbrace ownership it is legitimate to assume the generations closer to Captain Gunn (namely his parents, grandparents and great grandparents) were accurate. Captain Alexander and his father were, as already said, noted historians and genealogists so it is not conceivable that Captain Alexander would get a great-grandmother wrong. We therefore have Captain Alexander Gunn’s great grandmother who was directly descended from the last lot of Gunn ‘Chiefs’ in living memory of the person constructing the tree.

It is important to note that Captain Gunn had nothing to prove when he was writing the tree as descent through the female in the supposed ‘Gunn Chief’ line was not accepted in 1896.

I discuss this genealogy further in the next chapter where much more evidence in support of this descent is given, see chapter 10, generation 8, number 11 as an example. See, as well, Appendix 2.

Overall the 1896 Tree is clear and written by someone who was accepted as knowledgeable in the area (as was his father), dedicated to Gunn history and genealogy, who was there at the time and who was not trying to prove anything for a personal reason. These are very strong reasons why the tree should be accepted as accurate for at least the three generations earlier than the person who wrote the tree – and those three generations show the MacHamish ‘Clan Gunn Chief’ line exists.

There is further proof of the accuracy of this 1896 tree. The tree records ‘John eldest son of the Chief’[2] (9,13); the ‘Chief’ here being ‘Chief’ Alexander Gunn McHamish of Killearnan and Navidale (8,9). This is important as the National Records of Scotland have material on Alexander Gunn (8,9) of Killearnan – and records John (9,13) acting as Head of the Family in 1658 – and his sister ‘Kaitharin’ Gunn (9,14). It is proof that John Gunn (9,13) of Killernan existed and should be viewed as a ‘Gunn Chief’ – more accurately head of the MacHamish line - even though he has not previously been so recorded. Note there is no mention of any ‘Chief of the Clan Gunn’ in the following document when obviously in such a document it would have been mentioned, again suggesting that the position of ‘Gunn Chief’ was never in existence.  This is further independent proof for Captain Gunn’s tree being accurate in that a primary source supports John (9,13) on the 1896 tree.

Discharge and Renunciation by John Mackay [McKay] of Meleness [Melness] in favour of George, Lord Reay, narrating Marriage Contract, dated 1 and 8 May 1658, and Registered in the Sheriff Court Books of Sutherland 15 May 1676 between John, Lord Reay, as burden taker for Lieut. Col. Angus Mackay, his brother german, with consent of said Angus, on the one part, and John Gun [Gunn] of Killernan [Killearnan] as burden taker for Kaitharin Gun, his lawful sister, procreated betwixt the deceased Alexander Gun of Killernan and the deceased Dame Mary Mackay Lady Fowlis [Foulis], with consent of said Kaitharin, on the other part, whereby for causes therein specified said John, Lord Reay, obliged him and his heirs to infeft said Lieut. Col. Angus Mackay and Kaithrin Gun, then his future spouse, in conjunct fee and liferent in all and whole the wester nine penny and half penny land of Meleness in the barony of Kintail, and also said John, Lord Reay bound himself to make payment to the heirs male to be procreated betwixt the said Angus Mackay and Kaitharine Gun at the term of Whitsunday following their decease of the sum of 4000 merks and to infeft said heirs in so much of said lands for payment of annualrent of said sum, - to which Marriage Contract and sum of 4000 merks and sasine following thereon said John Mackay has right by Disposition and Assignation from said deceased Angus Mackay (therein designed of Meleness) and Kaitharin Gun, his spouse, father and mother of said John Mackay, dated 6 July 1697; and seeing the said George, Lord Reay, has made payment to said John Mackay of said sum of 4000 merks therefore said John Mackay as having right by said Disposition and Assignation and as eldest lawful son and heir procreated betwixt said Angus Mackay and Kaitharin Gun Discharges said George, Lord Reay, his heirs and others the representatives of said John, Lord Reay, of said sum of 4000 merks and annualrents thereof and of said Marriage Contract and Disposition and Assignation thereof and renounces said lands and delivers up the writs but in respect the said Disposition and Assignation also conveys the contract of wodset of the lands of Froskill and so cannot be given up said John Mackay binds himself to register the same and deliver an Extract thereof. Dated at Mellness 25 February and Registered P.R.S. Inverness 1 March 1726. Witnesses: Hugh Munro and Angus MackIntosh, servitors to said Lord Reay.[3]

Other National Records of Scotland exist for Alexander Gunn (8,9) of Killearnan[4] which again show his importance, and again with no mention of him being a Gunn Chief.  So we have to accept an Alexander Gunn (8,9) of Killearnan being alive in 1644 but dead by 1658. The dates conflict hugely with a document in Thomas Sinclair’s The Gunns page 156 where Alexander (8,9) is meant to be alive in February 1668. The conflict is solved in chapter 10, generation 8, number 9; the answer is that various ‘Chief’ Alexander Gunns have merged in Gunn mythology.

As well, as discussed in chapter 10.3, Sutherland Estate documents support other, older parts of this tree so it is legitimate to assume that the most recent part of the tree as far Captain Alexander Gunn’s great-grandmother[5] is accurate especially given the reputation of Captain Alexander and his father in this area.

A further Gunn family tree - by Aeneas Gunn of Edinburgh - is discussed in Thomas Sinclair’s ‘Appendix’ to his Gunn history text.  I have two versions of this tree – namely an 1868 and an 1870 version.  I know where the originals are stored; mine is the only known copy of the documents and these trees have not been used in Gunn discussions since the Sinclair book.

Aeneas Gunn[6] descended from the Osclay line and was a cousin of Captain Gunn of the 1896 tree, but Aeneas descended from a younger brother of Captain Gunn’s mother (who was Catherine Gunn (12,38 and 14) who married Donald Gunn (13,65) the sennachy of Braehour and Brawlbin). Given the genealogical link to Captain Gunn much of these trees provide useful information and, like the 1896 tree it is drawn as a tree. Note that, like Captain Gunn, Aeneas Gunn had nothing to prove when writing his trees as the importance of the females in the ‘Gunn Chief’ line was not then accepted.

These 1868 / 1870 trees also have material about the Gunns of Watten who do not merge into the MacHamish line; this Watten material provides support for the idea these trees used the Rev. Alex Gunn of Watten’s material. This is supported by a comment in Thomas Sinclair The Gunns page 147 where Aeneas Gunn acknowledged being ‘indebted’ to the genealogy of the clan by the Rev Alex. Sage, lent by the Rev. Alex Gunn, Watten.

Thomas Sinclair The Gunns provides much useful, but poorly organised, information. There is also much in it which is factually wrong as he merges genealogy with myth with tall stories with history and treats it all as being of equal merit. The Gunns is to be celebrated, though, as providing a base for much information which would have been lost. The Supplements to this text are also often worthwhile – but also often inaccurate.

Mark Rugg Gunn’s history is often confusing and contradictory; I am not aware of much (any?) new information in the book. The lack of footnotes to support his claims makes much of what he wrote questionable. He also blended history with mythology.

The Sutherland Estate documents in the National Library of Scotland are of real importance; these documents provide facts. Facts are in short supply for Gunn history.

Bits and pieces of genealogical information can be found elsewhere, such as in Donald Sage’s text. The Gunn information in Burke’s Peerage contains information which many find questionable.


[1] It is extremely difficult to get primary source proof for early Gunn genealogy, but Sutherland Estate primary source documents prove this tree was accurate for the stated generations. See chapter 10, generation 8, number 11.

[2] His death details in the tree are not accurately recorded as shown by the NRS document on the following page.

[5] Who does not know their family history to their great-grandmothers?

[6] Mrs Aeneas Gunn who wrote the Australian classic ‘autobiographical novel’ We of the Never Never married into Aeneas Gunn’s extended family. Her husband, Aeneas Gunn – not the Aeneas of the 1868 and 1870 tree author but related to him - wrote articles and his ‘Under A Regent Moon being a 2002 republishing of his 1891-1892 articles describing working in the Kimberley Region of Western Australia was received with acclaim.