Capt. Alexander Gunn never saw himself as Chief of the Clan Gunn.

In essence the issue is simple, it is traditionally considered that Captain Alexander Gunn was 'Chief' of the Clan  Gunn and 'of Badenloch and Wester Helmsdale'. I think this is wrong - I note that the MacRob Gunns are the only ones with a near contemporaneous mention of being Chief of the Clan Gunn (in Caithness, in particular).

Below is material  from the legal battle between the Earl of Sutherland  and 'Alexr Gun of Western Helmsdale' in the 1735-1738 period. 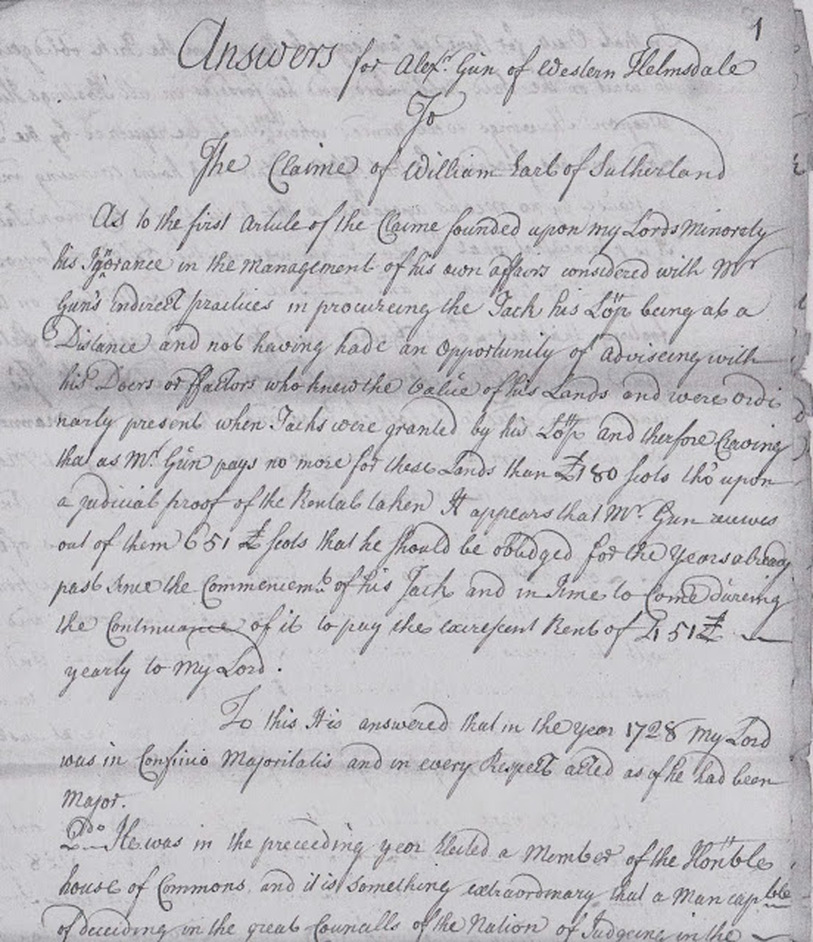 the extract reads (he and) his predecessors had for ages past possessed these very lands from the family of Sutherland to whom they were as given Steward or at least not in the Common Class of tennants and the Tack...' 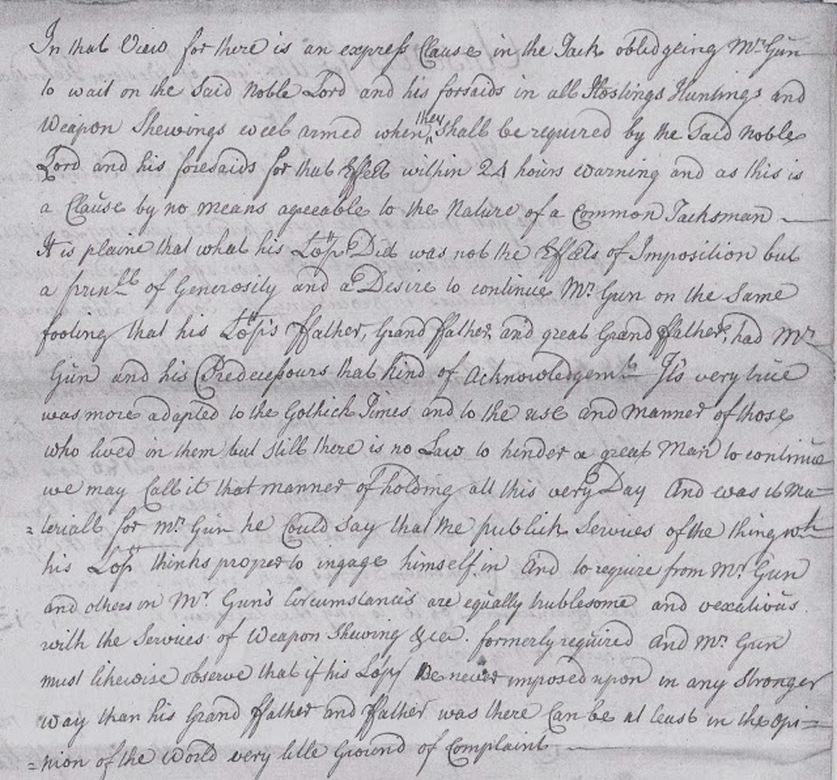 Page 2
He then details (on page 2) clauses in the Tack showing the Gunns were special; in essence with '24 hours warnings' ... ' oblidging Mr Gun to wait on the said  Lord and his forsaids in all Hastings, Huntings and Weapon Shewings'  and Mr Gun must turn up 'well-armed'  - 'a Clause by no means agreeable to the Common tacksman'. Yes, but no mention of the Clan Gunn being involved and one would have thought it axiomatic that 'Chief of the Clan' be mentioned here as it's Alexander's defence as it would be an extra cost he had to pay. And there is not even mention of the Clan Gunn in Sutherland (suggesting a 'Chieftain' status) being involved .

So we have here Alexander Gunn of Western Helmsdale's defence of the past; he considers his family to have been 'Steward' of Badenloch or at the very least 'not in the Common Class of tennants'. Now, surely one would have proved not being in the 'Common Class of tennants' by mentioning being Chief of the Clan Gunn? It is, after all, a major legal battle which involved the main Edinburgh courts. You would not miss such an obvious piece of proof.  As well, would you not highlight your status at the start of your own document?

So where one reasonably expects to see in this document mention of being Chief of the Clan Gunn it is not there; the strongest reason for this is that he did not consider himself to be Chief. And when looking through various other Estate documents of the time - including earlier - for this line there is no mention of Clan Gunn Chief.  All that is given is 'John Gunn of Navidaill' and such like. (The 'Mckemish' is used but solely to differentiate people - MacRob is used, MacHeorish is used...) Now, everyone else mentioned in the documents gets their title given, or 'of place X' and such like; the documents are matters of historic politeness. The lack of any mention of 'Chief' in these primary source documents is highly suggestive that this line was not  Chief.  The lack of use of' 'Chief' here when it would be central to his defence is clear proof that the MacHamish line did not view themselves as Chief of the Clan Gunn. They viewed themselves as important; but not Chief.

So why is this line viewed as Chief? One has to suspect Sir Walter Scott's romanticisation of the Highland past making a need for some Gunns to match a fictional past (all Clans must have a Chief even when none had ever existed), the first Clan Gunn Society (c. 1820s) with its support for this line - I note that dominant members of that society were linked to the MacHamish line - is explored in detail in another entry), a willingness to not analyse the historic past (we are not even totally sure which sons of Gunn Crowner existed, let alone the correct seniority) and repetition of a story so often it becomes a 'fact'.

Part of the 1736 draft summons document for Alexander Gun (of Wester Helmsdale) detailing attendance in Edinburgh and with no mention of the Clan Gunn or Clan Gunn Chief....
I note one instance - the below - in Donald Gunn the Sennachie's manuscripts (in the Wick Library archives) where he writes of his grandfather Alexander Gunn of Dalnaglaton (who had married Janet MacLeod) that he 'went to Badenloch and told his Chief...'  The problem with this is simple - it is written two generations after the actual event by someone who helped decide who was 'Chief'. It gives support for the idea that Badenloch was of importance, nothing more. The legal documents by the MacHamish family where they do not state they were Chief are clearly of far more importance.