'Clan' Gunn
Thomas Sinclair 'Gunn History' 11th Instalment 10.2.1903; Gunn Keith battle and more...
Review
Not a lot of interesting Gunn genealogy in this one, more tall tales and a bit of history. Much seems like mythology. In a time of blood, murder and betrayal the key events below seem unlikely in the form told.  Fine, I can see a battle with the Keiths, the Gunns lose but enough of them are left to catch the Keiths later when the Keiths may have had a bit too much to drink in celebration.  But the story line as told is just too unlikely...

I have written in more detail about the Gunn Keith  battle elsewhere here.

The key issues / people are;
·        Braehour parchments and papers.
·        M’Hamish family possession (powder horn, time piece owned by the Coroner 1478) and papers (including a charter for Navidale) held by sergeant John Gunn Brora Sutherlandshire.
·        ‘Gunns exercised the full rights of lairds on the feudal system of law.’
·        Gunns of Rattoo in Ireland.
·        Charles Smith ‘History of the County of Kerry’.
·        The Irish Gunns marry into the Townsend family.
·        Probably arrived 1649.
·        James 1 1394-1437 made major changes to traditional Scottish land holding system (assorted Earl Stuarts discussed). Key issue; Gunns had ‘charters’ to land which was burnt in Killearnan House in 1690.
·        Keiths, Coroner Gunn 1520, Bruan, St Tear’s Chapel. Gunn Coroner 'Crowner'  killed. Glutt 1530; the normal two Keith to a horse story (which just seems a bit dodgy to me. If you are going to cheat why not just bring more men on horse anyway? Why leave some Gunns alive when you have superiority of numbers etc.) Castle of Dirlot. Six Gunns killed on the spot ( As said, you bring eighteen Keiths to kill nine Gunns . You only have to kill three more and none of the following would have happened...).William Henry and Torquil escape. Torquil dies from his wounds. (So what Keith could not have caught a badly injured person?) So that leaves William and Henry. William was then ‘Chief’ but said he would make  his younger brother Henry ‘Chief’ (as Henry asked)  if Henry  killed Earl-Marshall Keith that night. So off they go to the Keith’s castle and go in by the drawbridge. (What, no guards at all? Especially after tricking your rivals and killing many of them and letting some escape...?)  Henry then shot (with an arrow) the main Keith, Henry then cried ‘compliment of a Gunn to a Keith’.  William and Henry then proceed to kill all the rest of the Keiths (yes, just two Gunns take on all the  Keiths). They then go into the castle and take their father’s coat of mail, helmet, claymore and shield. (Yep, a full day’s work - they fight in a major battle, then totally conquer the enemy’s castle and then take their Dad’s stuff back.  It’s a story line which creaks as too unlikely for an action movie... Icing on the cake though being that ‘Chief William’ goes back on his promise to make Henry Chief. So after superhero type battles, one of the good guys goes back on his promise and stays chief, interesting role model...). Henry gets cross at not getting his way,  so nicks off to Westerdale and Dale and calls his sons ‘M’Enruaig’ or Henderson. But let’s note why he did what he did; he didn’t want to kill Keiths for revenge, he wanted to kill for personal gain or merely to annoy his brother....
·        Different story; Moneart (great strength) Gunn some time in 1820-1830 was suspected of cattle-stealing; a youth was sent to search his premises. Gunn murdered the youth but a woman Patterson was meant to have been involved and she was the more nasty.  (Of course no Gunn could do evil without being influenced by someone else...) Gunn makes it to Brawlbin, the house of Peter Swanson, his daughter Jane washed bloody Gunn's clothes. The murderer was apprehended. The Gunn was possibly from Badenloch. (Re cattle stealing - I recommend  School of the Moon by Stuart McHardy 2004. It's all about the the Highland cattle raiding tradition and pages 170-173 have a great yarn about the Gunns which I will retell here some time after the Sinclair Supplements are finished...)
·        Donald Gunn of Braemore (when a force of 300 from an opposing Clan met him, he managed to kill 299 of them, the last escaped into a Chapel... Not convinced.). Other stories about him.
·        His brother was Alexander Gunn of Geise.
·        Churchyard of Spittal... ‘many of the chiefs of the Gunns are buried there’. 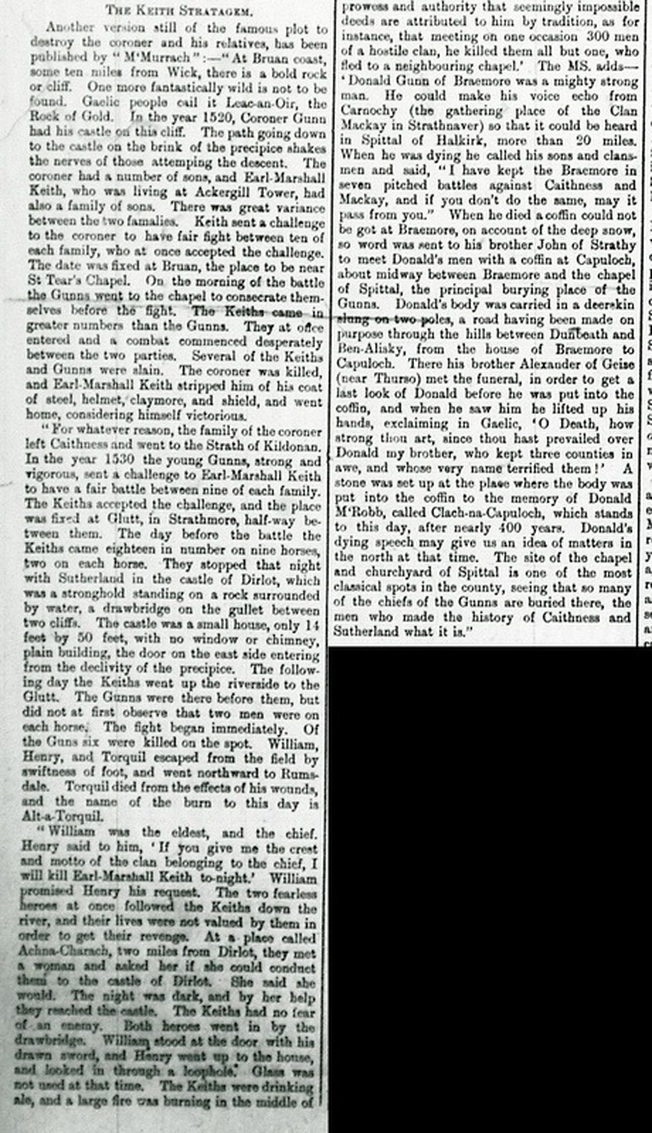