It was (Sir Walter) Scott who, to add “aboriginal” colour to George IV’s “jaunt” to Edinburgh in 1822, invented the cult of the clan tartan … arguably one of his finer works of fiction.[1]

'the tartan mania is not a disease which has grown less virulent over the years'[2].

‘Originally tartan designs had no (Clan) names and no symbolic meaning …’.[3]

The cult of tartanry … tended to be co-opted into a Scoto-British imperialism.[4]


One can see how tartan of an area would historically occur – a person would dye wool using the natural colours of the district. But that district / regional tartan wasn’t named after a family. The word ‘tartan’ in fact derives from the Celtic tuar (colour) and tan (district)[5] – again showing it was cloth of an area, not of a family.

So, what happened? ‘In 1842 Queen Victoria and Prince Albert visited Scotland. The young couple fell in love with the country, and tartan, which had been simmering for 20 years since the visit of King George IV, bubbled up again…. The brothers John and Charles Allen, calling themselves Sobieski Stuart,[6] finally published Vestiarium Scoticum, (but which was based on drafts from the late 1820s on) which introduced 75 new tartans to the delight of the trade.’[7]

Consider the Verstiarium Scoticum. The book’s authors presented the text ‘as historical proof of the connections between tartans and family clans, a link that previously had no record. The Stuarts’ claims were later found to be completely false; the tartans in the book were in fact designed by the brothers themselves. Even still, their fabrications are to this day widely accepted as authentic by manufacturers and families alike’.[8]

So, a whole pile of named ‘family’ tartans were created for the Verstiarium Scoticum and given a fictional history so tourists would buy them. And Gunn tartan is in the book.[9] Now there is a chance that this Gunn tartan reflected earlier tartan worn by Gunns and others near them – that chance offers one reason why Mackay, Gunn, MacWilliam and Morrison tartans look so similar.[10] But named Gunn tartan is nothing more than a Victorian invention to get money from historically confused tourists and which continues to do so.  As I have said before so much of Gunn ‘history’ is mythology and named Gunn tartan is part of the mythology.

[4] Page 47, Colin Kidd ‘Teutonist Ethnology and Scottish Nationalist Inhibition 1780-1880’ in The Scottish Historical Review Volume LXXIV, 1: No. 197. It is interesting to note that members of the Scottish Nationalist Party never appear in tartan (Page 218 Celeste Ray Highland Heritage) which sums up the irrelevance of the tartan in modern Scotland.

[6] They also claimed to be the grandsons of Prince Charles Edward Stuart – ‘Bonnie Prince Charlie’. See page 146, Robert Clyde From Rebel to Hero: The Image of the Highlander.

[8] http://www.brooklynrail.org/2012/06/art_books/vestiarium-scoticum accessed 16 July 2017. The willingness to believe that which was not historically accurate had earlier (and later) examples; James Macpherson in the mid 1700s invented the third century Scottish bard Ossian and ‘discovered’ his poems -  Scotland and Europe completely accepted them for many years.

[9] https://commons.wikimedia.org/wiki/Category:Tartans_from_the_Vestiarium_Scoticum accessed 16 July 2018. And is described on page 88 of the original book. It makes reference to the Gunns as Ghuine which gets back to the original name of the Gunns, see chapter 1.4.

I have no idea for how long the tartan was used. 'The information held within The Scottish Register of Tartans for the "Commonwealth Games" tartan is shown below.

... Designed for the livery of the Scottish Team for the Commonwealth Games and first used for the Games in Melbourne, Australia, 2006. The Commonwealth Games were the brainchild of Bobby Robinson and were first held in Canada in 1930. The name Robinson is associated with the Clan Gunn and therefore the Gunn tartan was used as the base for the new design. Colours: the mid blue colour with the white line through it closely represents the saltire and the bright purple colour was introduced as the colour of the thistle, which features on the Commonwealth Games Council logo.' 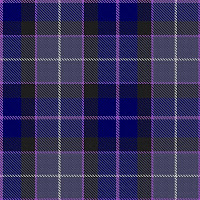 Registration text
The text has been created by the Keeper of the Register from information supplied by the applicant. This text is subject to Crown copyright. You may re-use the Crown copyright protected text free of charge in any format and for any purpose. The text must be acknowledged as Crown copyright and you must give the source as the Scottish Register of Tartans.