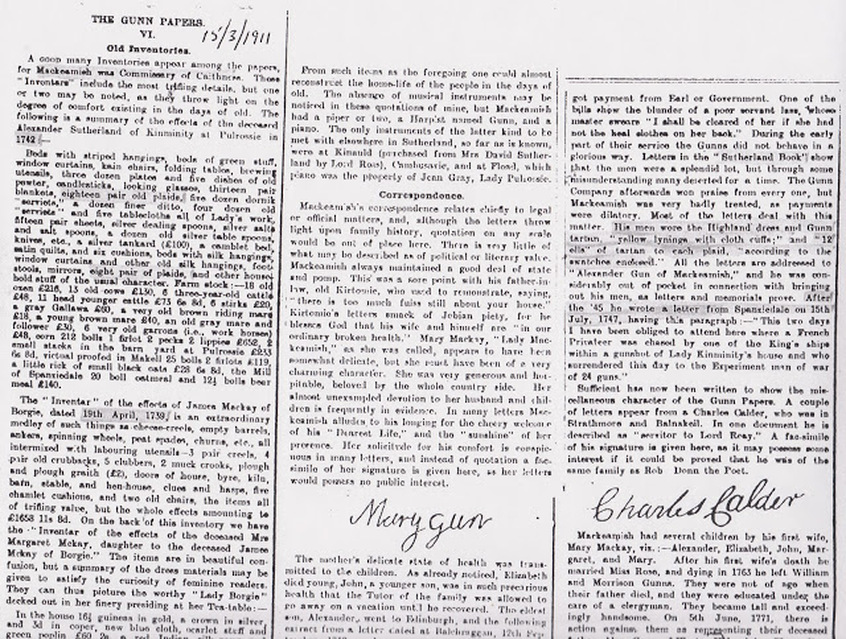 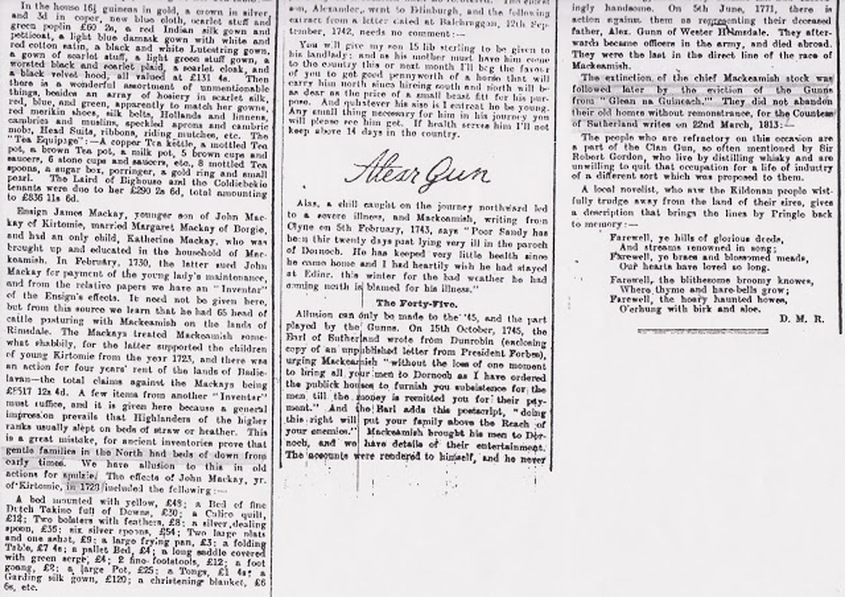 Not the most interesting document, but it does provide some forgotten detail. Probably most value is what it suggests about the Gunn behaviour in the 1715 and 1745 risings where the Gunns support Hanover...

It’s the last of the material from ‘The Northern Chronicle’. One can recognise some of the stories from Sinclair's history, but then some of this material reappears in Mark Rugg Gunn's book.

Inventories (lots of them) (as in dead people’s item lists)

‘Mackeamish was Commissary for Caithness ...  Alexander Sutherland of Kinminity at Pulrossie in 1742 ... James Mackay of Borgie 19 April 1739 ... Mrs Magaret Mckay daughter to the deceased James McKay of Borgie ... Ensign James Mackay, younger son of John Mackay of Kirtomie married Margaret Mackay of Borgie  and had an only child Katherine Mackay  ... who was brought up and educated in the household of Mackeamish. In February 1730 the latter sued John Mackay for payment of the young lady’s maintenance, and from the relative papers we have an ‘Inventar’ of the Ensign’s effects. ... The MAckays treated Mackeamish somewhat shabbily, for the latter supported the children of young Kirtomie from the year 1723, and ther was an action for four years’ rent of the lands of Badielavan ... The effects pf John Mackay of Kirtomie in 1723 ... Mackeamish had  a piper or two, a Harpist named Gunn, and a piano (rare).

15 October 1745 Earl Sutherland urged Mackeamish to bring his men to Dornoch, he did. The ‘During the early part  ... Gunns did not behave in a glorious way ... many deserted ... (later) The Gunn Company won praise from everyone .. but Mackeamish was very badly treated as as payments were dilatory ...


Bits
Mackeamish had several children by his first wife, May Mackay Viz; Alexander, Elizabeth, John, Margaret and Mary. After his first wife’s death he had Miss Rose and dying in 1763 he left William and Morrison Gunns...
Powered by