The Clan Gunn Convention totally ignored Lord Lyon’s first guideline for the holding of a Family Convention, namely –Basically Lord Lyon is differentiating between the legalities required to conclusively prove Chief descent when it gets to his legal court, and a Chief descent which may not quite be able to be proved to that level but which one can rationally accept as ‘likely’.

The ‘Braehour Gunns’ provide an excellent example of a ‘likely’ Gunn Chief line which should have been discussed at the Convention; one proof is that the Commander used this line as part of his 1984 claim to be made Clan Gunn Chief.

Now Lord Lyon Sellar rejected an earlier petition for a Family Convention, which wanted to make the Commander Chief, on the basis that ‘it has become evident that there is in all probability clear and proveable lines of descent senior to that of the present Commander’http://www.lyon-court.com/lordlyon/files/Gunn%20Family%20Convention%20-%20Interlocutor%20refusing%20petition%20in%20hoc%20statu.pdf  which means that Lord Lyon Sellar accepted that the ‘Braehour Gunn’ Chief line exists but considered that the Commander was not the right person to be so nominated as Chief (under the guideline for the holding of a Family Convention) as he was a not a senior enough member of that line. In other words Lord Lyon expects the most senior person of the ‘likely’ line to be nominated as Chief.

Therefore the ‘Braehour’ line should have been discussed at the Convention as Lord Lyon Sellar has, by implication, given legal recognition to it as descending from the Clan Gunn Chief line.

The key points of this ‘Braehour Gunn’ line are
Given Lord Lyon may disallow lines for various reasons (lack of marriage, for example) I have provided three lines.  I believe successful claimants not bearing the name Gunn would have to change their name to Gunn.

So what do I mean by the ‘Braehour Gunn’ line? In summary it is below –

Part of this line was agreed to by Lord Lyon Sellar in his September 2011 Interlocutor where he accepted -
1. ‘6 Alexander 5th Mackeamish’ had
2. ‘34 George Gunn of Borrobol’ had
3. ‘35 John Gunn in Kinbrace’ – from the senior son of John Gunn comes the ‘Chief Hector’ line and, from the second son, my ‘Braehour and Brawlbin’ line.  I believe ‘35 John Gunn’ is not in Kinbrace as primary source documents show it to be impossible (see my Kinbrace discussion elsewhere on this site); but it is the person, not the place, which matters as a link to a John Gunn has been accepted as a Chief link.

There are two variations of the Braehour descent from the Clan Gunn Chiefs. The main issue is whether the line is from Alexander Gunn 5th Mackeamish or from another son of John of Navidale, 4th Mackeamish (see later, under ‘Proof a’ Burke’s Peerage).  In essence I accept the 1896 family tree of Captain Alexander Gunn as Captain Gunn and his father (Donald Gunn the Sennachy, shown above) are accepted as major historians of Clan Gunn material -

Captain Gunn, Braehour … is admitted to be, if not the greatest, at least a genuine, living authority on Gunn questions … It were strange if the captain had not been well posted up in all historic points, seeing that his father, Donald Gunn, Braehour, was the acknowledged sennachy or historian of his time … an unusually leaned sennachy.

And Captain Gunn is a direct descendant of this Braehour line so is writing about his direct ancestors on the 1896 tree. This direct descent would lessen the chance of errors – the critical John Gunn (as Lord Lyon accepted proof from the Chiefs down to him, as mentioned earlier) was merely his great  great grandfather. I would suggest that anyone reading this article will have accurate knowledge of their own great great grandfathers and so should accept this aspect of this tree as highly likely to be accurate, unless proved otherwise, especially given that Captain Gunn’s father Donald (Braehour) was a highly regarded Sennachy and so it is legitimate to assume Donald would have drilled his son in genealogical matters, especially of his own, direct family.

Finally, though, the confusion does not matter as what is important is that both lines accept that Donald Gunn of Braehour and Brawlbin was directly descended from the Mackeamish - Chief - line.

PROOF
a. From Burke’s Peerage[2]

He writes –
The second cadet branch from (Chief) John of Navidale was … (then it is inaccurate but ends with) Donald the sennachy Brawlbin… .’
The inaccuracies do not closely match either of the two main descent lines. This extract does add support for Donald of Braehour and Brawlbin descending, somehow, from John Gunn 4th Mackeamish.

Where he is discussing the ‘Braehour Parchments and Papers’ of Captain Alexander Gunn, says –
Captain Gunn traces … back to a second son of John of Kinbrace (being ‘35 John Gunn in Kinbrace’) Alexander Gunn, Dalnaglaton, who died in 1765. His son John, Braehour, died in 1810. Donald Braehour and Brawlbin, who died in 1861, was John’s son and successor.

‘Hector Gunn, Thurso, and my grandfather,’ Captain Gunn says, ‘were first cousins; their fathers, George of Knockfinn, and Alexander, Dalnaglaton, being brothers, the sons of John (being ‘35 John Gunn in Kinbrace’) …, son of George of Borroble, second son of Alexander of Killearnan and Navidale.’

The second quote is strongly supported by Captain Gunn’s actual tree. Again, the issue is simple – Donald Gunn of Braehour and Brawlbin shared common ancestors with the Hector Gunn line recognised in the 2011 Interlocutor as having ‘Chief’ descent.

d. Commander Iain Gunn of Banniskirk’s 1984 petition to be Chief of the Clan Gunn
On pages 3 - 4 of the Commander’s petition he accepts the line from Alexander Gunn 5th Mackeamish to ‘35 John Gunn in Kinbrace’, then he details the Chief Hector line which matches the 2011 Interlocutor.


Footnotes to the above (and below)

[2] ‘Burke’s Peerage’ has Commander Gunn of Banniskirk’s descent being less senior than mine, and that the name Gunn has not always been his family name whereas my family has always carried the name Gunn.

[3] For information on these important trees see the ‘Appendix’ in Thomas Sinclair’s The Gunns or http://clangunn.weebly.com/clan-gunn-blog/clan-gunn-history-and-clan-gunn-genealogy-rediscovered-scottish-archives-vol-19-2013 These trees were drawn by a younger brother of Catherine Gunn of Osclay; she married Donald Gunn the Sennachy (the Braehour line). 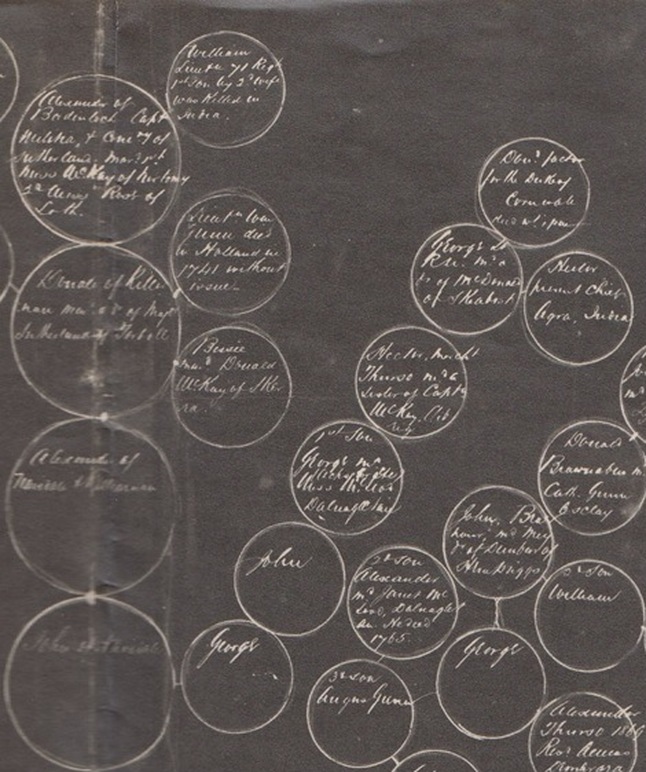 The left hand side shows the Chief line – bottom left is John Navidale, then to the right we have George; John; Alexander  (2nd son)- to the right - married Janet MacLeod Dalnaglaton 1765; John Braehour md. May / Marjory Dunbar Hempriggs; Donald Brawlbin married Cath Gunn Osclay.
​
This primary source document shows Donald of Braehour and Brawlbin’s link to John Gunn of Kilearnan and Navidale.  I question the descent from the 4th Mackeamish – but otherwise the names accurately reflect the descent I accept.
The 1868 Family tree also, albeit more messily, confirms this; 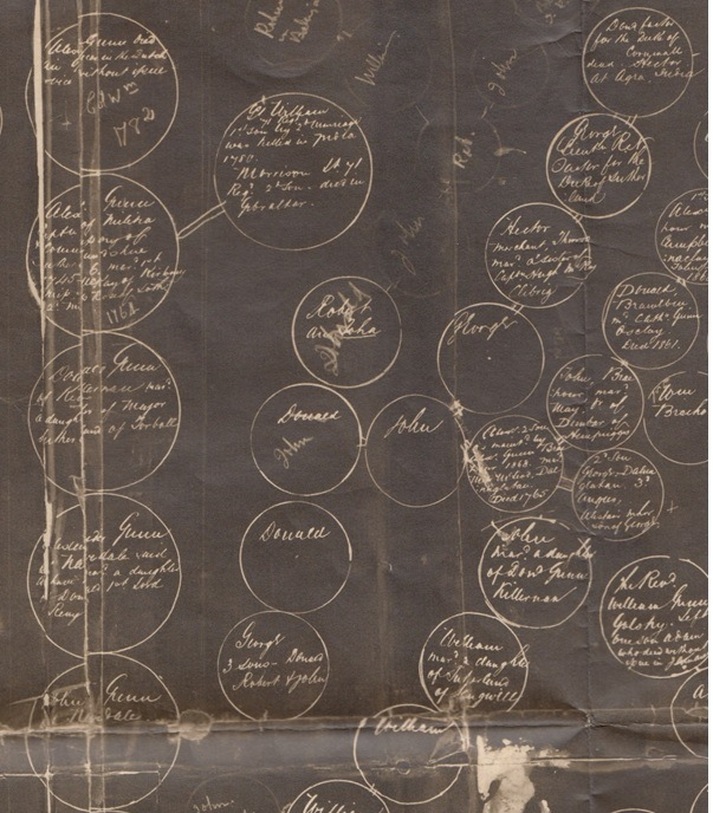 The left hand side shows the Chief line; the bottom left shows John Gunn of Navidale. He has a son George who has three sons. One of which is John (written over Donald) and the name John is then repeated; then we have Alexander married Miss McLeod Dalnaglaton. He died 1765. Then we have John Braehour marrying May Dr of Dunbar of Hempriggs. Then we have Donald Brawlbin marrying Catherine Gunn of Osclay Died 1861. Note the Hector ‘Chief’ line just to the left of Donald of Brawlbin; both these lines share ancestors. See the next point.
So both of these very early trees provide clear support for Donald of Braehour and Brawlbin – the Sennachy – being a direct descendant of John Gunn of Kilearnan and Navidale, the 5th Mackeamish and sharing an ancestor John in common with the ‘Chief Hector’ line.
​
f. The 1896 tree of Captain Gunn, son of Donald Gunn (sennachy of Braehour and Brawlbin)

The 1896 tree shows Donald Gunn (Sennachy of Braehour and Brawlbin) descending from the Mackeamish line in this case Alexander Gunn 5th Mackeamish. The name sequence is not identical with some of the earlier evidence, nor some places, but the key point is that both this tree and the earlier evidence accept descent from John Gunn 4th Mackeamish.  It is not the exact sequence of names which matters between John Gunn 4th Mackeamish  and Donald of Braehour and Brawlbin – it is, as already said, the acceptance that there is definitely a Chief descent  which is important.

Again, this tree proves that Donald Gunn of Braehour and Brawlbin is the most senior line from ‘Chief’ Hector Gunn’s line recognised in the 2011 interlocutor. My family line is now the most senior from them to always hold the name Gunn.

I would normally now insert the 1896 tree but it i s too large to do so.

***
So much had the Braehours been accepted (as next Chief), that Factor Gunn’s son, the last McHamish, before his death, sent to Captain Gunn, as one of his nearest relatives, all the papers on the subject which he possessed…
​
Thomas Sinclair, The Gunns pages 185-186

I suggest that this Braehour line is an excellent example of a ‘likely but is not conclusively proven’ line which Lord Lyon has as his first guideline for what should be discussed in a Family Convention. As already said, the Clan Gunn Convention paid absolutely no attention to Lord Lyon’s guidelines and so there was no discussion of this Chief line (or any Chief line)…

And it would be a poor judgement, in my view,if Lord Lyon was to accept the Convention's motion, not least as the Convention had no agenda nor have any minutes been circulated. How can I know my view was fairly circulated?

But there is another, more senior line yet to be entered on this site which has not been discussed before…