‘Magnus , the Crowner who served on the Inquest of 1458 ... his battles... 1426-1438... he had three sons whose names appear on record Thomas, his heir, Alexander in the Dale and Henry who are both mentioned in 1456.... But there may have been more sons ... (massive list of those who claim to descend from the Gunns)...  Thomas the Crowner succeeded his father ... According to the family history the Crowner of the time was George, but there is no record of his existence... (16 August 1464 document cites  Thomas Crowner of Caithnes, James his son...)... Crowner Keith battle questioned ‘The truth is both (Crowner and Keith were alive after the battle) for some years after 1464 but Thomas was dead before 1479... he had James the Crowner, Robert ancestor of the Robsons, Captains of the Gunns in Caithness, John ancestor of the Gunns in Dalemore, Alexander, William ancestor of the Williamsons, Torquil and Henry ancestor of the Hendersons....James the Crowner succeeded his father about 1478 (various fights)... two of his children appear on record—James and Christiana...From James, second of that name, derives ...’Mackeamish’ ... This James never held his father’s office... Christian was an extensive breeder of cattle, for on 12th March 1500...James, son of the Crowner, evidently lost possession of the ancestral buildings ... long before 1510... James was succeeded by his son William ... This William was brought up at Cattack (Cattaig?), and he was the first of the family to settle in Sutherland. He came to the district of Strahullie between 1520 and 1525, with a considerable number of his kinsmen, who were probably driven out of Caithness ... (Mackay writers are wrong about dates and Macrimon pipers, and a battle)...William Mackames Wee Cruner Capyain of the Clan Gun in Sutherland, first appears in 1525... Some of the tribe were guilty of the most terrible atrocities... William Mhor... Alexander Gunn of Kilernan and Navidale succeed his father  William Mhor .... Gunns acquired rights to Navidale ...  difficulty with money ....succeeded by his son John, in whose time financial disaster  came...  (primary document) John Gun of Navidaill ... deceist Alex Gunn his father and ‘Uncle?’ William Gun ... Macleods of Assynt’.

Well worth a close read. 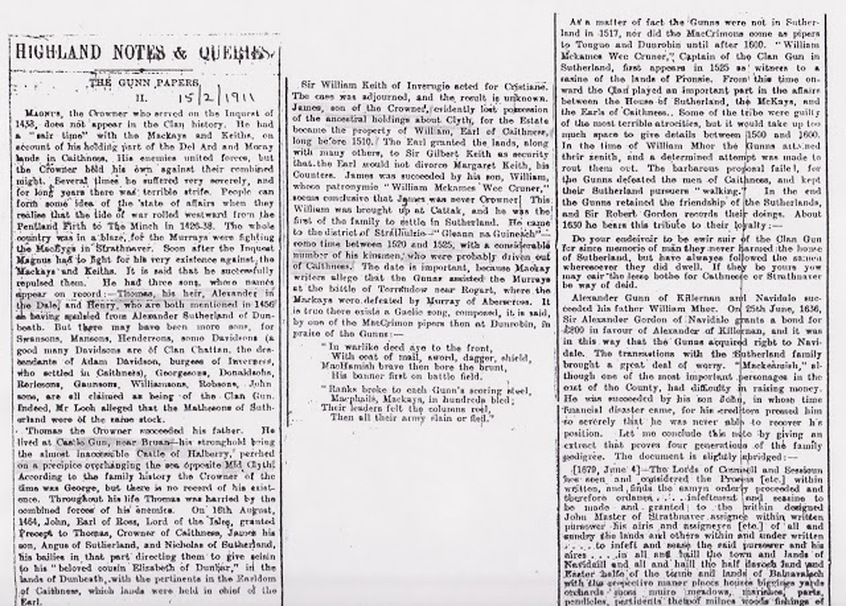 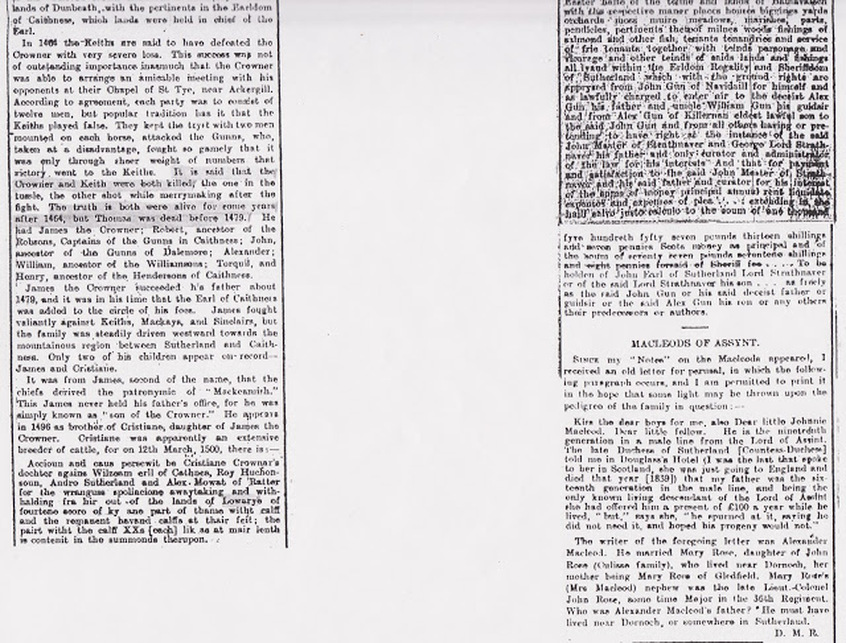