being from pages 97-99 of An account of the improvements on the estates of the Marquess of Stafford in the Counties of Stafford and Salop and on the Estate of Sutherland with Remarks by James Loch Esquire, London, Longman , Hurst Rees, Orme and Brown, 1820.
This clan ... (lived) in a most remote and inaccessible country, they continued to live in the committal of continued breaches of the law and yet to escape punishment. This character, even to a late day, distinguished in a remarkable manner, some individuals of this Clan and district, and the people of the heights of Kildonan were long noted for being the least observant of the laws of any in the county. Indeed it is only within the last five years that the disappearance of a sherriff’s officer, who was sent up to execute a  warrant in a civil process, led to the recollection of many stories of former days. Their country was peculiarly favourable for carrying on illegal distillation, and they did not neglect to take advantage of their situation. They obtained, with much ease, their grain from the corn districts of the adjoining county of Caithness, and the inaccessible and remote situations of their habitations, made it neither very easy nor advisable, for the revenue officers to follow them into their recesses. The nature of their country gave them equal facilities in disposing of their whiskey....

Donald Gunn, commonly called Donald Cruin? was a descendant of the Braemore Gunns, he was for some time a Servant to Angus Gunn (butt?) he had a brother called Johnn Gun. Donald was a farmer in Achaclate year 1703. he held some land in Dalnaglaton Some time after the above year He was a man who possed strength and swiftness far above the commonality of people, and was among those who would have their requirements  whither right or wrong from those that could spare, as late as the above date  even respectable people sheltered such characters as Donald in order to procure Beef and matter for them from their neighbours without money or price. Donald was such a man that would not scruple for taking a man’s life on a slight provocation, which he did, providing tradition is true, among others he was charged with the murder of Pauldaugh (?) at the foor of Dal Glaton(?), Stathmore The murdered man was not named Daphan i e OH (?) and attempted to save his life by plunged to the river to a layer (???....) when Donald followed him and killed him. And buried him on the east side of the River, his blood was to be  ...  with him for a long time thereafter, this is a large stone is still there and likely will  remain

On some other accasion his servant maid by him and on his refusing to pay her her wages, which was lawfully due to her  remarked that she would in revenge inform and reveal some of his doings, he pursued after her

And overtook at a small stream running from the West into Loch Ellanach wher he killed her. The little stream is called ever since  Aullan na nighin Ril i e? small maid’s Burn. On one accation he was down in the lowland and came to a farmer ‘s House after nightfall, and found his way in to the Byre, and selected the best and fattest cow, being a black cow, he applied whitning to the cow’s head, and turn her to the outside, and soon  as he did so he entered to the House of the owner of the cow and requested them to give him a rope to lead away a fractious cow he had and also to assist to fasten the rope to the cow’s horns and move her away from the house, as the cow appeared  as a whit faced cow they never formed any idea that the cow was ther own .. behold in the morning the farmer found that he wanted one of the best cows he had, and too late came to understand that he was sold by Donald - 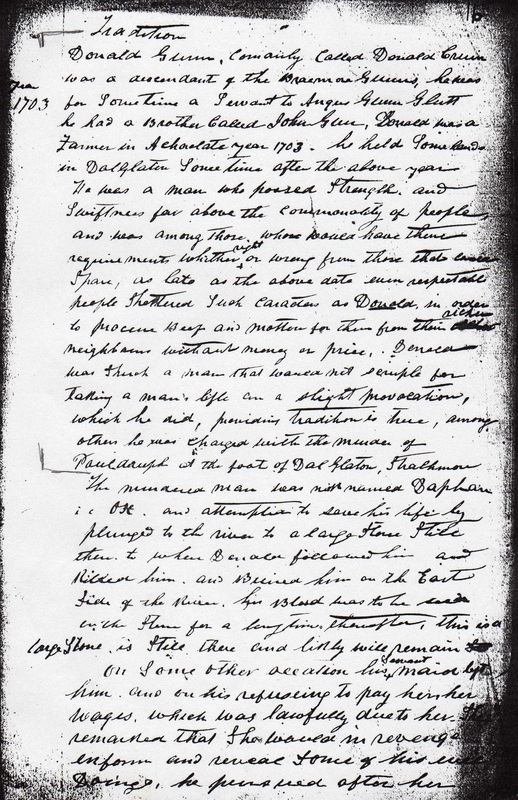 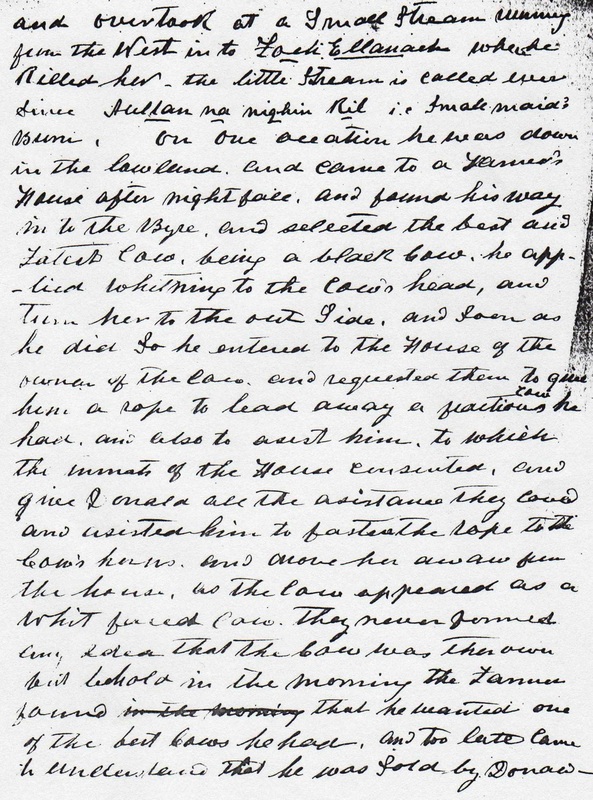