'Clan' Gunn
The Gunn Papers; 'The Northern Chronicle' 22. 2.1911
Another fascinating article. A key point is that the author of this 1911 account accepts that George Gunn in Corrish ‘had several descendants alive in 1812’. Now, he is willing to question many accepted Gunn historical positions, so this supports again the idea that George Gunn in Corrish  as  Gunn Chief line needs further exploration--

‘John Gunn of Killearnan and Navidale had a trying time in 1679 ... brother-german George Gunn in Borrobol, was an importunate creditor (of John Gunn)  (2000 merks)... the total failure of crops in 1679 ... The position of sub-tenants of John Gunn was precarious in the extreme ... their whole sticks and chattels were ;liable to be poinded for Gunn’s debts ... John Gunn and his son Alexander ... Alexander who succeeded his his afther John, had a trroublous time. He married Christina Mackay ... (her marriage contract)... In Alexander’s time the family practically lost Killearnan ... house was accidentally burnt during the preparations for a great hunt in 1690 (rumours concerning Earl of Sutherland, Donald Cottach getting men together etc.) ... All scuh stories are extremely plausible until properly investigated ... these circumstantial ytales must be treated as suspect. It was only about 1701 that the Ear tokk any active steps to eject the Gunns. The relative papers show that it is very doubtful if there was an ejection at all,  as the parties came to terms .... Donald ‘Crottach’ was the next  ‘Mackeamish.’  He succeeded his father in about 1714. During the ‘15  the men of the Strath were brought out on behalf of the House of Hanover (in other words not supporters of the House of Stuart) ... The Sutherland levies did not play any glorious part in the ’15 andy more than in the ’45.... Donald the Hunchback was the last mackeamish in Killernan

He married a daughter of Sutherland of Torboll, and had-Alexander of Badenloch b 1692, George in Corrish, who had several  descendants alive in 1812 and Lt. William who had a commission during the ’15 and was afterwards in Cunningham’s regiment. Donald Croottach died in 1722

Alexander Guun of Badenloch ... was born in 1692 ... 1712 entered into a contact of marriage   with Mary Mackay, daughter of John Mackay of Kirtomy ... The contract very curiously makes no allusion to Donald the father of Alexander Gunn ... (Contract given, some humour) ...  John Mackay of Skerray (note Mackays of Skerray have links to Esther Gunn) Donald Mackay Younger of Skerray, James Mackay of Borgie and Alexander Fraser ...  money ... contracts ... Gunn acquired right to Wester Helmsdale ... William Gunn brother german of said Alex Gunn... ' 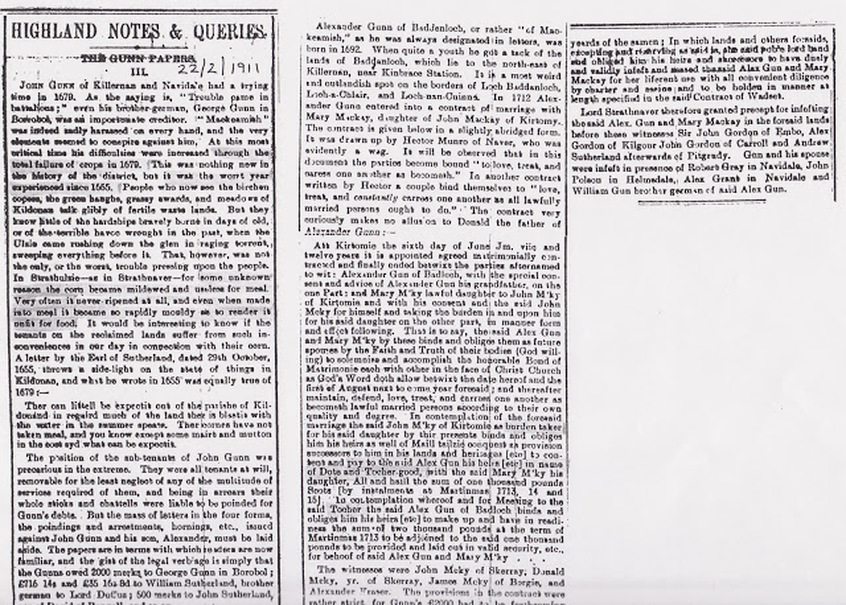 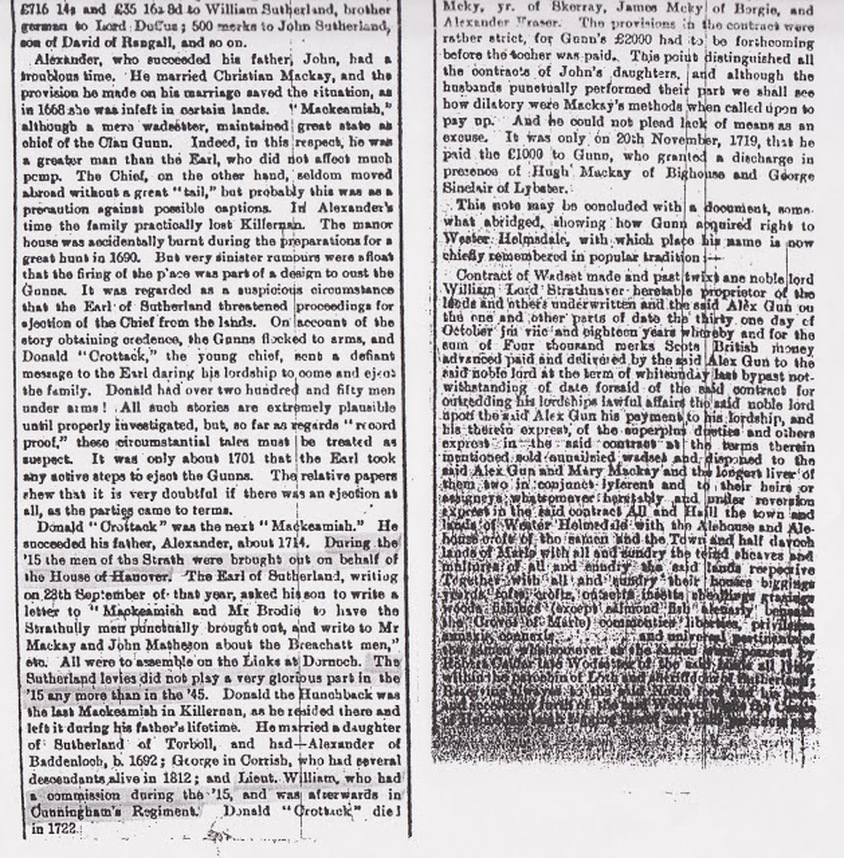