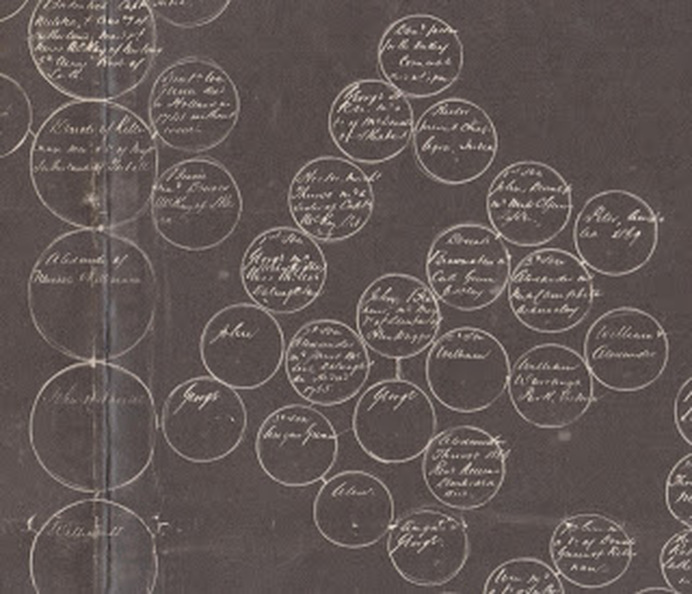 John Gunn of Navidale, start at the second circle up on the LHS.
Okay, this line I know as I come from it.

Going back to the main tree.  (the following relates to my tree which I have placed earlier on this blog)
·        The 2nd son Alexander married Janet Macleod Dalnaglaton died 1765.
·        Alexander had
o   1st son John Braehour who married May a daughter of Dunbar of Hempriggs
§  This John had Donald of Brawlbin who married Cath Gunn Osclay Died 1861. (He had 1st  son John of Durness married C. Gunn Clyth? 2nd son Alexander married Miss Campbell Achnaclay and son Peter 1869 Australia?)
§  2nd son William (Who had William Waranga Park Victoria who had sons 1.William and 2.Alexander)
§  George (presumably 3rd son?) (Who had Alexander Thurso, Revd Aeneas Demerara died by 1869)

The second cadet branch from John of Navidale was John (with brother Alexander father of George, whose son was Big Alexander, and also father of John, whose sons were William in Braehour and Donald the Sennachy, Brawlbin, the latter father of Captain Alexander Gunn, once in Braehour, now in Watten, who has a son Peter in Australia), George, Hector, George in Rhives, who had a brother Donald and son Hector.

Now, as said, before, the idea many have that all descendants of Gunn 'Chief' lines have gone is just wrong. I'm here as are many others...
Powered by