'Clan' Gunn
Gunn Braehour Chiefs, Hon. Donald Gunn Manitoba Canada; Sinclair 'Clan Gunn History Supplement 15', 12.3.1903
Review
I’m biased, obviously I like this supplement as the vast majority is about my family or my relatives. In particular (although it is a little inaccurate) it highlights the Braehour links to the old Chief lines, which is a key part of my objection to the proposed Gunn Family convention idea which supposes no-one can prove links to the old Gunn Chiefs. As Lord Lyon points out on his site, if a Family Convention is held the key issue is appointing the most senior cadet line to be Chief; I have provided his quotes to me elsewhere on this site about this issue.  Only if there are no possible cadet lines does the ‘appoint a random person to be Chief’ come into play...

·        Biographies of Hon. Donald  Gunn Manitoba Canada 1797-1878. (He’s on my family tree and in my bookScotland and Beyond; the Families of Donald Gunn (Tormsdale) and John Gunn (Dalnaha, Strathmore and Braehour) I wish I’d read this Supplement earlier; I would have included some of the phrasing from this article...
·         Not surprisingly ‘ his pedigree appeared a dozen years before the revival in 1890 of the question of the chiefship ... It goes exactly  with the tree ofof the Braehour family by Captain Alexander Gunn who died at Thurso in 1899, first cousin of the Hon. Donald...
·        As these are the representatives of the M’Hamishes, the chiefs, hereditarily, the only form of succession in the Highlands since the close of the rebellion in 1746, further details about them by the captain have special value, even at the risk of repetition of facts. Alexander, the fifth M’Hamish, lived in 1650, whose second son was George of Borrobol, who had a son, John of Kinbrace, whose son Alexander, in Dalnaglaton was the patriarch of the Braehours, his second son John being the first Braehour.  The eldest son, George, Dalglaton, had a son Alexander, Dalglaton, who died in 1785 without issue, and a son Donald who was drowned with all his family in the loss of the emigrant ship on the Newfoundland coast which sailed from Scrabster in 1807, the “ Lough Mohr America,”.. John Braehour, had Alexander, eldest, a soldier, who died without issue; John the second, with a son John, a soldier, without issue; Donald, Braehour, the sennachie, third son; and William, father of the Hon. Donald.  Donald, Braehour, had eldest son John, once in Carriside at Loch Calder, thereafter in Durness, who was the chief from 1874 till his death in 1886, and whose eldest son Alexander, sub-factor at Durness for the Duke of Sutherland, was chief of the Gunns from 1886.  Captain Alexander Gunn was the eldest son of Donald, Braehour, born in 1814, much later than his first cousin Hon. Donald, Manitoba; and had a family of sons and daughters, his representative being Peter, Australia.  Donald, Braehour, had a third son, William, named after his uncle the father of Hon. Donald, but he died young. (Okay a word of warning; this is not totally accurate – especially on the Australian Gunns. Seehttp://clangunn1.blogspot.co.uk/2012_02_01_archive.html for further detail on this tree. It’s just further proof that the petition for the Clan Gunn Family Convention which assumes that no-one can prove any descent from the Chief line is just factually inaccurate.)
·        Descent of early Gunn chiefs.
·        Captain Alexander Gunn of Watten.
·        Hon. Donald Gunn ‘History of Manitoba’.
·        John Gunn J.P. Gonor Manitoba.
·        Hon Donald Gunn ‘elder brother ‘one of the largest wool-growers and sheep farmers in Australia. (This being William Gunn of Waranga in Victoria.)
·        George Gunn member of St Ann’s.
·        Gunns evicted from Kildonan to Canada.
·        Earl of Selkirk
·        Hudson Bay
·        ‘Prince of Wales’ and ‘Eddystone’
·        Commissary General Gunn-Munro d. 1892 London (occupied the same tent as Gordon of Khartoum).
·        Memorials of John Gunn M.A. F.G.S. Rector of Irstead and Barton Turf.
·        Rev. William Gunn 1736 the only Protestant clergy in Rome showing HRH the Duke of Sussex and Lady Augusta Murray got married (Scandal: he was Prince Augustus Frederick, 6th son of George III etc. Seehttp://en.wikipedia.org/wiki/Lady_Augusta_Murray). The paperes were kept by him till his death when his son, the previously mentioned Rev. John Gunn who handed the proof of marriage to the children of the marriage. The ‘return’ was he got to be chaplain to the later Duke of Sussex’...
·        George Borrow used to visit John Gunn when Gunn retired (I really like George Borrow’s works...)
·        Rev. William Gunn d. 21.4.1843 wrote some books... 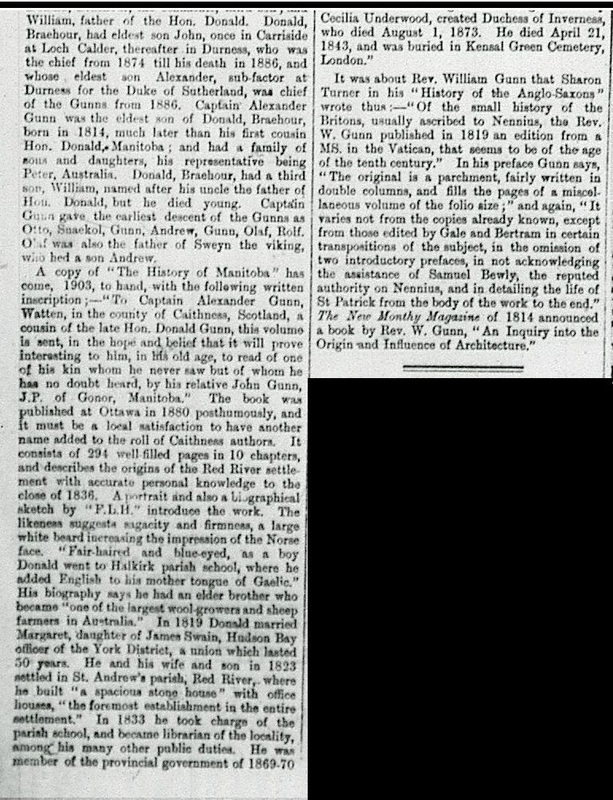