'Clan' Gunn
Gunns of Corrish 'Chief' again, with discussion of land law and Braemore Gunns; Thomas Sinclair History of the Clan Gunn Tenth Instalment; 3.2.1903.
Review;
This Supplement  is really in two parts. The first section is the Sinclair article which is strong in discussing early Scottish land law and how it impacted on the Gunns, then it drifts into discussing the Gunns of Braemore. The next is a letter, which discusses the Clan Gunn Chiefship and says Sinclair is biased and the next Chiefs should be from the Gunns of Corrish. (See earlier posts with links to a potential Corrish line. It actually sounds very like the 1868-1870 tree material.) Overall it’s interesting on the early history, but limited otherwise.

The key issues / people in the Supplement are;
·        Aeneas Gunn  Edinburgh MS (my 1868-1870 trees)
·        Issues as to whether the Gunns owned Killearnan 1478-1690
·        Gunns ‘ever faithful to their masters the Earls of Sutherland’.
·        Gunn ‘commander or chieftain is called Mackwick-Kames, and remains always in Killearnan, in Strathully, where he has some lands or possessions from the Earls of Sutherland as fee for his services. John Gunn, a chieftain of the clan Gunn in Caithness and Strathnaver  did ...1618, make his refuge of Sutherland, having fallen out with the Earls of Caithness and Mackay, so that the whole surname for the present depends on altogether upon the house of Sutherland.’
·        ‘So far I have come across no record of the Gunns ever having been proprietors of either Killearnan or Navidale... the Gunns were either life-renters or tenants-at-will of Killearnan.’
·        Gunns ‘acted in the capacity of swashbucklers’ for the Earls of Sutherland.
·        But, alternatively, ‘the Gunns were not only veritable proprietors of Killearnan and Navidale’; legal point based on old Scottish law. Basically, Gunns may have been tenants but only in a feudal sense; nominal rent to the overlord. Inheritable lands...
·        ‘Gunns of Killearnan could hang men or drown women who were criminals...’
·        ‘main line of M’Hamishes lairds but there was, see ‘Acta Parliamentorum’ a junior line of them from John, laird of Borrobol in 1649...’
·        ‘Gunns of Braemore were lairds...’
·        Crowner ‘laird of Ulbster’.
·        Various early Gunn lairds discussed, especially John M’Rob Gunn Braemore
·        An interesting bit of genealogy to link the above with Reverend  Alexander Gunn Watten. (Includes Portnacross, Hastigrow)
·        Andrew Gunn / Guin  Thurso lawyer.
·        George Gunn Braemore wife Anna Bain
·        Clan Gunn Chiefship letter against Sinclair
o   Argues Sinclair is biased in favour of Gunn of Braehour
o   Points out that Gunn of Braehour is wrong on the Corrish line for many reasons
o   Rev. Alex Sage Kildonan wrote 'the succession to the last and 7th MacHamish, whose family is extinct, are the descendants of his older brother, commonly called George of Corrish, who had two sons tenants in Kildonan, called Alexander and George. Alexander had three sons, William Donald and Robert, who is a sergeant  in the Cromarty Rangers. George the second son had four sons—Thomas in India, Alexander, William and James –all living.’
o   Rev. Alex Gunn of Watten
o   Robert Gunn Achanakin sennachie
o   Hector Gunn 1803
o   Rosse’s Annals show ‘George of Corrish’s sons there to be the nearest relatives to the chiefs.’ (mention of Major Donald Scots Brigade Holland and Alexander father of the late William, Backlass)
o   ‘testimony of the above experts, written and oral, all show that the Corrish descendants are the nearest relatives and lawful heirs to the extinct chiefs. 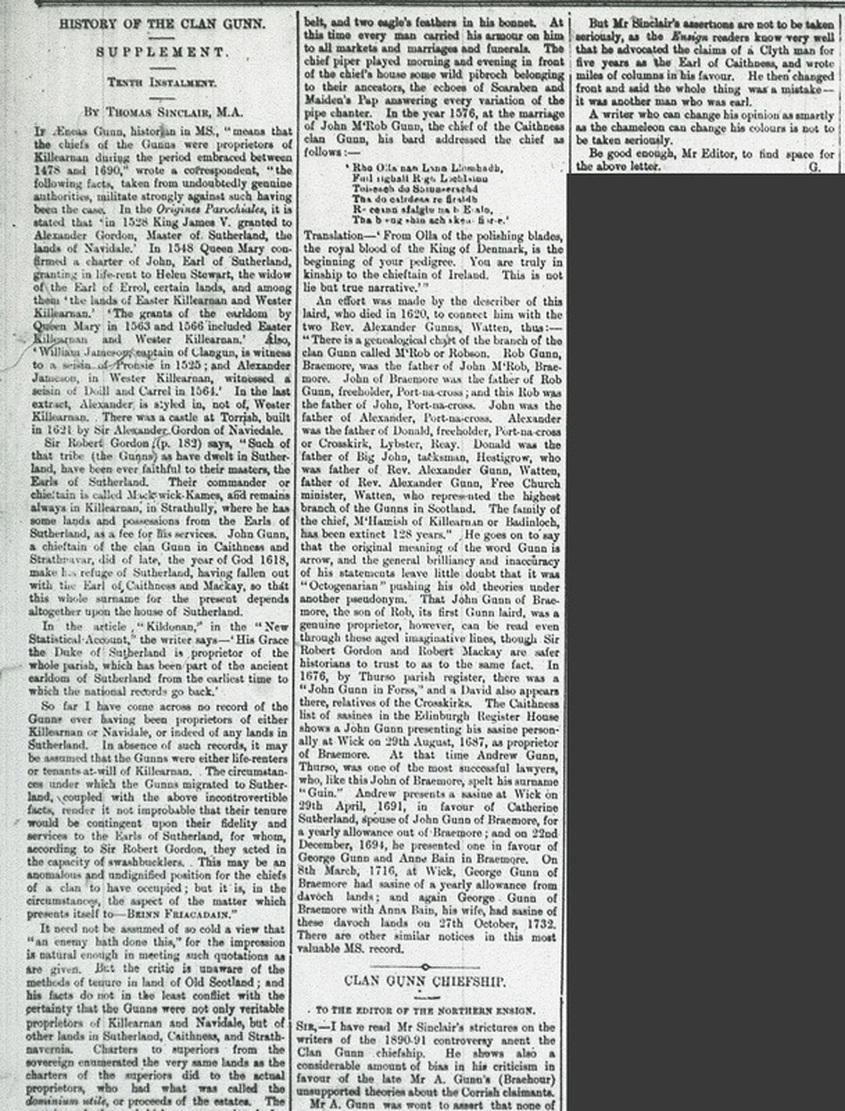