... My grandmother married in Quebec City in 1908. Her wedding announcement said that she was given away by a Frank Gunn, Norwegian Consul for Canada.  ... Frank Gunn was a wealthy Quebec City ship chandler/coal merchant who had originally come from Ireland and, having made "good", sponsored other Irish folk to come over to Quebec. ... I  found a record of his marriage in 1869, when he was 32. In that record, it said that his parents lived in Fermanagh. ... I managed to find his birth record in Enniskillen ... His wife, Elizabeth O'Malley, was born in Quebec in 1847 and according to the marriage register, her parents were John O'Malley and Rose Ann Brady who were living in Quebec at the time of her marriage. ...  I still don't know whether Frank Gunn was actually related to my grandmother or whether he heard that she wanted to come to Canada and offered to sponsor her. ... 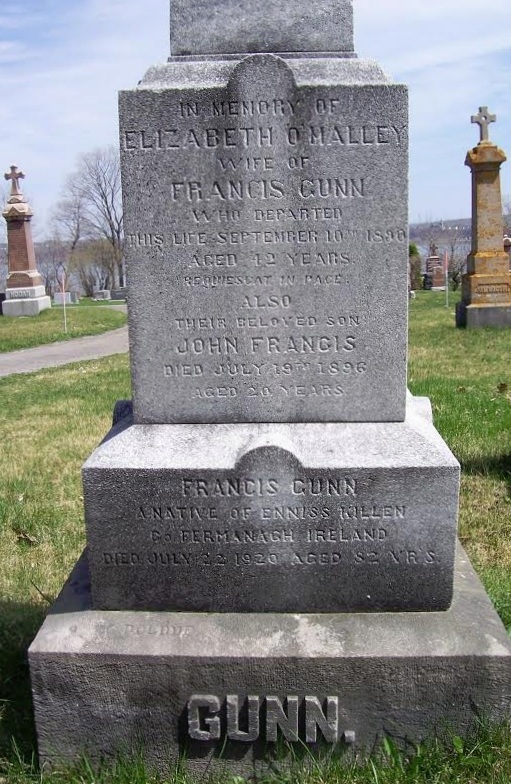 Being the gravestone for Francis Gunn, his wife Elizabeth O'Malley and their son John Francis Gunn in St. Patrick's Church,
Quebec City.
And from another email offering different information to the above -

From the earliest records, Elizabeth (Sweeney) O’Malley, is listed as the widow of John O’Malley. She arrived in Quebec City in 1831 with her son John and her recently born daughter Julia. In those early years, I found that John the son signed church records with various spellings ie.: O’Mealy, O’Malia, etc.... The obituary of Elizabeth Sweeney lists her as being a native of Westport, Co. Mayo, which I presume was the place of origin of John O’Malley her husband.
Powered by