Now, as I have discussed elsewhere I believe the Clan Gunn has no Orkney link whatsoever but for those who like this myth it is worth considering the less than totally reputable lives of the two Saints who have been dragged into Gunn 'history'.

It is interesting to contemplate Saint Magnus and Saint Rognvald.  Now most of the information about them is from various Sagas but Sagas are not historical texts. They are later written, embellished stories with perhaps some truth.

The first issue is to clarify the Saints relationship to the traditional view of Gunn history (as said, I think the Gunns have no Orkney link) , because it’s tenuous. In fact if I was picky, Gunni, see below, is the first ‘Gunn’ and he comes after these two Saints. But if we take a more modern view, meaning DNA related, then Rognvald is a direct ‘Gunn’ and Magnus is a ‘related’ Gunn. (Magnus dies without known children.) It’s worth noting that the supposed  line of descent for the Gunns from the Orkney ruling Jarl (or Earl if you want it anglicised) line is through the female. If one was talking traditional male genealogy neither of these Saints would be of importance to the Gunns.

Now, the time is the late 1000s, early 1110s. There were a lot of rulers of Orkney, not least due to wars and murders. Often they ruled in pairs. The key simplified family tree is below.

had children these included

Ragnhild m. Gunni (grandson of of Sweyn Asleifsson, the Viking hero) the anonymous namesake of the Clan Gunn 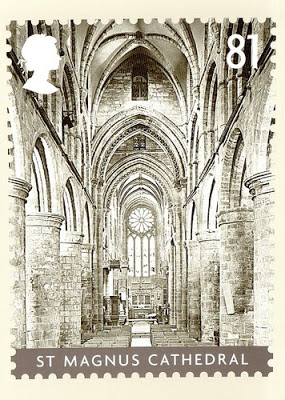 ·        I note an interesting view of the early years: ‘While the Orkneyinga Saga account is clearly meant to emphasise the Earl's “holiness”, the Magnus Sagas do not shy away from his less-than-saintly deeds and escapades as a younger man - although it does make excuses for him.

For example, The Greater Magnus Saga recounts how Magnus, in true Viking fashion, spent several years raiding, raping and plundering. This, it declares, was due to the company the young Magnus kept, but beneath the hagiographical gloss it does seem to hint at a truer picture of life at the time.http://www.orkneyjar.com/history/stmagnus/relics.htm

·        Hamish Haswell-Smith in The Scottish Islands records (p.179) says that Magnus ‘married a girl called Ingigerd but never consummated the marriage. Apparently cold water helped (Do I believe this given the previous point?)...  After some years he lost interest in married life (and being Jarl) and travelled south to the court of King Henry 1 of England (who was a reformer, but holds the record for the most illegitimate children by an English King. Twenty at least)...    (Later) Magnus reappeared with five warships (at Orkney). Haakon (the other Jarl, now sole ruler) rushed to arms but the ... Parliament counselled peace and a parley on Egilsay... Both parties were to take no more than two ships and equal numbers of men.’

Magnus was captured.  The two Jarls talked, and the men were involved (men probably of both ‘sides’).  Magnus (or is it merely hagiography) offered to go into exile (offering Rome or the ‘Holy Land’) but Haakon said no (fair enough, last time Magnus went missing he came back with five warships). Magnus then suggested he should be imprisoned, but this was also rejected. (Again seems fair enough for the time, such a prisoner is no solution as obviously all Magnus’ lot would then be out to kill you or kidnap you.) Then he offered to be maimed or blinded to which Haakon agreed BUT the men (Haakon’s? Magnus’s? Both?) objected and they are in the position of power. (So, the parley was actually taking place one feels; the common person’s impact is happening here.) The men say they are sick of two Jarls[1], they wanted one ruler and offered to kill either!  (So, the supposedly popular Magnus is not that popular with whoever was on Egilsay! And that’s ten shiploads worth of men. Another crack in the myth...) So, Haakon is sensible and says he likes being a Jarl more than he wants to be dead. Magnus said nothing but knelt and prayed and was killed.

Not much about piety and Magnus and, of course, the miracles for sainthood only occur after his death...

Further points from http://www.orkneyjar.com/history/stmagnus/index.html and elsewhere--

·        The King of Norway came for a visit in to Orkney in 1098, he overthrew the two Earls who were ruling and installed his illegitimate son as ruler. He took the sons of each overthrown Earl with him raiding down to Anglesey, Magnus did not fight but was meant to have stayed on board singing psalms. He is nowhere else mentioned in the raiding party’s activities in the Orkneyinga Saga. Was this psalm singing a late addition to the Sagas? It seems odd that such an important person was not mentioned again.

·        It is also suggested that if Magnus was there he may not have been involved with fighting for other reasons, namely he was already involved with Welsh affairs.

·        The Saga points out Magnus disappeared and only comes visible again in 1102, basically nothing is known of his time away from the spotlight.  In 1102-1105/6 he is at the court of King Edgar of Scotland. He does spend serious amounts of time at different courts. Little is known of King Edgar...

·        Worth noting that the bones of St Magnus found in the Cathedral are questionable; ‘it is either not Magnus' skull, or the saga's version of the earl's death is incorrect.’ http://www.orkneyjar.com/history/stmagnus/relics.htm

So, Magnus may have enjoyed a typical upbringing with a bit of raping and plundering, was perhaps a bit strange when married, meandered off to royal courts (such courts are rarely known for piety) and returns with warships. He seemed to have been a fair enough ruler and may have had a bit of religious spirit but nothing amazingly pious is mentioned. He gets involved in a ‘parley’ with his joint ruler and loses due to the common people being quite prepared for him to die.  But later the Magnus cult grows in strength, not least due to his nephew’s Cathedral.  As well, the Church is always good at propaganda...

[1] See pages 154-162 of George Mackay Brown’s Magnus for a fictionalised version of the final events. The people who are there with Magnus and Haakon just want one Jarl; and they don’t care which one. But George Mackay Brown clearly points out that Haakon was the better ruler. But it is fiction.

Rognvald was fighting to become Earl, because he wanted his uncle’s half share. (The uncle being Earl Paul). So

‘Rather than wage all-out war, he (Kol, his Dad) suggested that Rognvald should try and secure the earldom by other, less direct, means. Kol instructed Rognvald to tell the people of Orkney that once he became earl, he would raise the finest church the north had ever seen. This church was to be in memory of his saintly uncle, Magnus ... While Rognvald was capturing the hearts of the Orcadian people, behind the scenes he had Earl Paul kidnapped in Rousay and spirited from the islands....The Orkneyinga saga is unclear as to the fate of the dispossessed Paul.

So, Rognvald starts building his uncle’s Cathedral at Kirkwall. That’s quite useful; a ruler may or may not be religious but having a saint as an uncle, with a Cathedral dedicated to him, certainly helps shore up a new ruler’s position. (Rulers were meant to descend from God in the old days, as that way you couldn’t challenge what your ruler did as otherwise you were questioning God).

Rognvald is guardian to a nephew, Harald Maddadsson (Earl Paul’s son). He’s a useful nephew.  His dad had been the sole ruler of the Orkneys until he ‘disappeared’. (Various other people die who were not supporters of Rognvald, such as Frakkok.)  Rognvald appoints his nephew to be Earl with him; which quite neatly brings Caithness into Rognvald’s joint jurisdiction as the nephew ‘owned’ that land (but it gets lost over time)...

What else did Rognvald do which is saintly? He did decide to go on a Crusade, like many others, so he went to Constantinople 1153-1155. He gets killed in 1158 by Harald’s foster father and eight men.  And miracles are then meant to have happened. He gets canonised in 1192.

So, in dodgy times Rognvald made it to be a ruler as he had some claim to be, he was involved with all sorts of wars and political power plays, he creates a Cathedral for his dead uncle (not least as it improved his image and helped him to win the war).  He gets killed.   Then he gets to become a Saint a bit later after the normal, questionable miracles.

Overall, therefore, about 900 years ago Magnus and Rognvald had fairly typical lives for the ruling class.   Magnus seemed to be rather erratic in behaviour and nothing much pious is known about him. His nephew later found it useful to encourage the cult of Magnus by building a Cathedral. The propaganda further grew around these people and their actual lives have been thrust into long grass, hidden by bushes of romanticised mythology.
Powered by