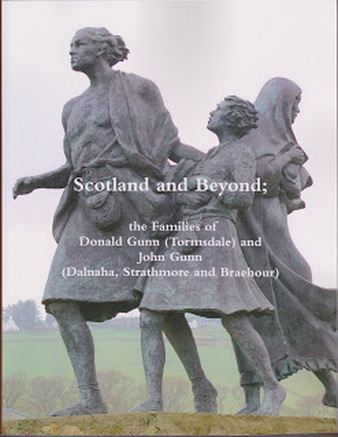 'Scotland and Beyond; the Families of Donald Gunn (Tormsdale)
and John Gunn (Dalnaha, Strathmore and Braehour)'
showing the statue 'The Emigrants' at Helmsdale, Caithness, Scotland.
I have just co-written a major (485 pages, US letter size) family history book which is printed by Lulu, probably the world's largest print on demand publisher (in other words I have nothing to do with the publishing).

It is in my opinion, and I know I am biased, a major addition to Gunn history as it places normal Gunns as exemplars of various historic trends in Scotland, Canada, Australia and (marginally) Jamaica.  This is because there is a huge amount of primary source material in it, for example there are letters describing emigrating to Canada (see below) and settling at Bradford, Owens Sound, in the early 1840s, Dundee Poorhouse letters of the 1850s / 1860s, Jamaica letters 1819, much in the ways of bills and letters from Scotland 1840s to the late 1860s, emigration forms, an 1853 retelling of a journey to Australia and much, much more. For those who care about such things it's worth noting that the Braehour line is a 'Chief' line; yes, it's one of the lines from which a Chief may descend. But that is not the point of the book; it's about normal people and how they adapted to their societies. It is, if you like, a people's history.

There are lots of surprises in the book. For example, many Canadian Gunns are linked to Australian Gunns.  Yes, the Hon Donald Gunn of Manitoba Canada is, for example, related to the Hon. J. A. Gunn (anthrax Gunn) of New South Wales...

There are two versions of the book, but both have the same text and images. One is a black and white paperback, the other is a hardback in full colour and consequently printed on much better pages. This is reflected by the price difference.

The book is available from

where sample (preview) pages can be found. I recommend visiting there, click on the title or image, wait for the new page to open and click on PREVIEW which is found under the book's front cover. Please note I have nothing to do with the publishing, printing or posting of the book and I do not see any details of those who buy it.

As we have said in the advertising on Lulu--

This book examines two linked Caithness Gunn families over many generations in places such as Scotland, Canada, Jamaica and Australia. It has many family trees, photographs and original documents including details of trips to Canada in the 1840s and Australia in the 1850s. Many letters from the mid 1800s are included. The book has many biographies including the Hon. Donald Gunn of Canada, William Gunn of Waranga Park, Sir John Gunn of Tormsdale and the Hon. John Alexander Gunn of New South Wales ('anthrax' Gunn). This book contains much original information showing how Gunns integrated into new lands.

This work has taken many years and builds on documents held within the family and much detailed genealogical research. Two versions are available; a paperback black and white version and a deluxe hardback version with some colour photographs. The information and images are the same in both texts.

Here is an example of the source material, a letter by Marcus Gunn describing his journey to Canada in 1842. It is from 'Owens Sound Upper Canada North America' via the ‘St. Vinsint’ post office. (The bits missing have disappeared from the letter.)

Bradford  27 September 1842
Dear John
I take the opportunity of writing you this few lines stating that I am in good health at present which I hope will find you in same, for the which I had reason to be thankful to the Almighty.  We have had a long passage of eight weeks and 4 days to Quebec for we had to stop 4 days at the Grosse Isle (to get our clothes washed) at the Quarantine Ground for we had Sicknes on Board and one death, and their was 24 in number of our passengers kept at the Quarantein in the hospital and the ship and the rest forwarded to Quebec and arrived on a saturday morning  after Breakfast we went a shore and saw a sight which I never saw an equal that Is the ports and Barracks.  Their is 3 regiments their at present.  The Pidoo(?) passengers was landed at Quebec and a great many of the rest which applied to the government for forwarding to Montrial gratis.  My Comrade and me and a few more of us was allowed by the Captain to wait a board the ship to Montrial and took us their gratis, for my part I could not express the kindness with which he treated me and my partner, that is Osborn Sinclair it was in the second cabon we had our births in when the sickness began the birth below ours  their was a wife and 3 Children and the woman and one  her children got sick and so very sick that we could get no rest by being in the Birth above for two or three nights.  I came in conversation one morning with the Captain and asked me how the woman and the boy was which I told him to be same way, only I told the Captain that we would not sleep in the same place that night should we sleep on dake the which he answered me imediately that he had an empty Birth and that he would make me and my partner welcome for the use of it to the Journeys end which we felt it very comfortable for when we all came to the quarantine all the chaff Beds was enptied and thrown away, and then had nothing to ly on but the bear deals., we had reason to be thankfull to the Almighty for that was the woman that died that was in the birth below us,  The Captain has been very kind he ordered a Coffin to be made and sailed as near as possible to land an got her buried.  When we got to Montrial my partner and me parted.  he waited at Montrial and I assure you we was sorry in parting with each other for he was such an agreeable fine lad we messed together all three together Mr McLennan him and me and we had a midaged woman from Inverness which was an acquaintance of Mr McLennan.  I took no kind of Beef neither Ham or mutton not a day ... Broth or fryed Ham to our din ... same to Montrial their was a few ... took a steam boat to Toronto ... but I found the Captain very kind ... bed from him in the cabin gratis ... beatiful country the very first hous ... of America we thought a great deal as the farther we went on the prettier it was.  As we was coming we was enquiring about their crops which is very good in General, which I hope to hear from you about your Harvest and crops.  I have no more particular news to mention but give my best respects Mr James Henderson  and and both Mrs Henderson and likewise give my Best respects to Donald Sutherland Thurso and David Gunn wife & family.  Likewise give my compliments to Chirsty McLeod and to the Revd. Rob Rose McKay likewise give my compliments to my brothers and families and to all the neighbours that enquires about me, and Especially to my Brother that I resided with wife and family and my dear little Johnie above all the rest and give my compliments to Donald (of Tormsdale 262) father (?) wife and mother & family, give my Compliments to your father and mother Brother and sisters not forgetting yourself.  mind write as soon as possible with all the news you can from the old country and how the price of cattle came and the price of the meal.
I have no more to say at present But remains yours truly
Marcus Gunn.

As can be seen, the source material applies to general histories of the areas in question, as well as being important to the actual families involved. In this case primary material from early Canada (especially Owens Sound / Sydenham ) is shown but massive Canadian genealogy is in the book as well, including family links to the Hon. Donald Gunn of Manitoba. Equivalent primary source (and genealogy) material for Scotland and Australia is also in the text.

This book is also available from 'Timespan' in Helmsdale.

For those with a particular interest in adding / challenging detail in the book 'Scotland and Beyond; the Families of Donald Gunn (Tormsdale) and John Gunn (Dalnha, Strathmore and Braehour)' please see http://gunntormsdaledalnahastrathmoreraehour.blogspot.co.uk/ which is a blog dedicated to just the book.

I note again that much of this book concerns the 'MacHamish' line (which some view as the 'Gunn Chief' line); many people are alive who come from this line. The idea that the 'Gunn Chief' line has died out is just wrong - that is, of course, depending on whether you think the MacHamish line was actually a Gunn Chief line. As I make clear elsewhere on this site I think the MacHamish line was never a Gunn Chief line as I strongly suspect there was never a Gunn Chief...

Be aware that new information occurs. The 1896 Family Tree of Captain Alexander Gunn (son of Donald Gunn of Braehour and Brawlbin) was not known when writing this book and it offers improvements on some of the offered genealogy, especially on the antecedents of the said Donald Gunn.