Ned Kelly and the Gunns 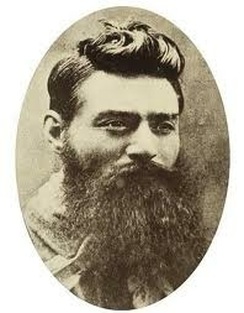 Ned Kelly is an icon; he is a crucial part of Australian history and was an 'outlaw' (a 'bushranger' in Australian terms).  He 'is considered by some to be merely a cold-blooded cop killer — others, however, consider him to be a folk hero and symbol of Irish Australian resistance against the Anglo-Australian ruling class'.
http://en.wikipedia.org/wiki/Ned_Kelly 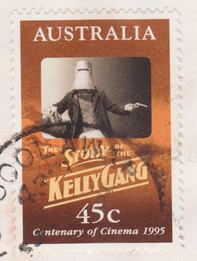 Shown is an Australian 1995 stamp  celebrating the film 'The Story of the Kelly Gang'  which was made in 1906 and which was the world's first feature film. Ned Kelly has also appeared on a 2003 Australian stamp and Irish 2001 stamps. 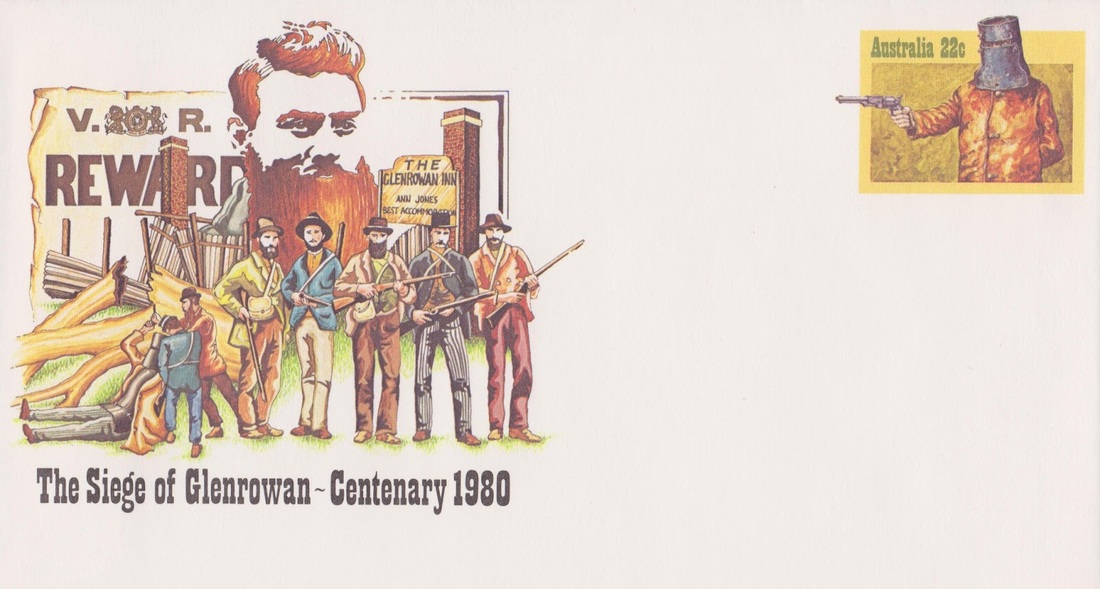 A 1980 Australia Post pre-stamped envelope celebrating Ned Kelly
There are some interesting films about him (one starring Mick Jagger as Kelly), some important art, and  one of Australia's greatest novelists - Peter Carey - has 'fictionalised' the life in his The True History of the Kelly Gang.  So the life (and myth) continues to be a crucial part of Australian culture and history, with some aspects of Robin Hood. His fascinating story is easily available to be read on the internet.

And there is a Gunn link!

My parents were William Hill Gunn & Isabella Gunn (nee Munro) from Perthshire Scotland.  I was born in Scotland in 1841.We travelled to Australia aboard a ship named the "Ida" and departed Liverpool England 25/3/1853 and arrived in Melbourne Australia on 12/7/1853 My brothers and sisters included Yeamon, William, Christina and Anne.I had a selection near Winton which was taken off me when I could not pay the rent. I then moved to Greta and worked for a farmer.I knew Ned Kelly when he was going around with Harry Power.  (Harry Power is another important 'bushranger / outlaw'.)I also knew Wild Wright and many of the other key players in the story of the KellyGang.In 1869 I married Annie Kelly in Wangaratta.In April 1871 Wild Wright came for a visit. Ned Kelly rode one of Wright's horses and was charged. It would appear that Wright did own the animal. I was also arrested by Const Hall with stealing a horse owned by William Adair. (Argus31/5/71)Ann died in November 1872 (Ensign15/11/1872)I wrote to the Argus (Argus27/11/78) I was living at Begowan Farm, Benalla,I used to 'ride' with the Kellys and Wild Wright (OMA11/1/1879)I remarried and we had a son, Robert Ferguson Gunn.I died at Glen Innes in 1925. My brother Jim said that I was dead in 1911.(BWC)
http://www.kellygang.asn.au/people/peK/kellyAnneKf.html

(I am using the above information as 'We welcome the use of this material for research purposes with acknowledgement but it may not be used for commercial gain ' )  http://www.kellygang.asn.au/homeus.htm#copyright

The first selectors - Eman Gunn, a relative of the Kelly's lived near Tatonga. (RC15489)
http://www.kellygang.asn.au/places/plS_T/tatongSR11.htmlI think that could be the previously mentioned 'Yeamon' Gunn

And the family lives on, I have been told. (The suggestion being that Alexander Gunn came from Kinfauns, Perth...)
Powered by