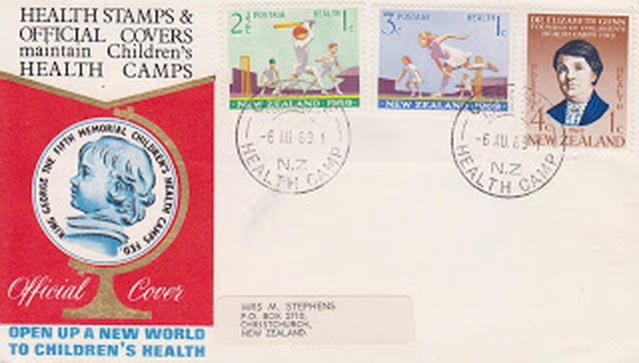 Dr Gunn is commemorated on the third stamp to the right, the other two stamps and the cover highlight her main achievement, the setting up of Children's Health Camps.

Gunn was born in Dunedin, the daughter of an ironmonger whose interests in medicine led him to change career initially to pharmacy and then to dentistry. She attended Timaru and Otago Girls' High Schools, and from there went to the University of Otago. After a year at Otago she left for Scotland, completing her medical qualifications at the prestigious Edinburgh Medical School in 1903, and then taking postgraduate studies in obstetrics at Dublin University.
After completing her studies, Gunn returned to New Zealand, working as a general practitioner in Wellington before joining the school medical service in 1912. From 1915 to 1917 she worked in the New Zealand Medical Corps, having succeeded in gaining admission to a predominantly-male preserve by her formidable force of character: upon initially failing to gain admittance to the NZRC she took her case directly to Prime Minister William Massey, claiming that this snubbing was injurious to her reputation in medical circles. She served during World War I with the NZMC at Trentham and then on the troop ship Tahiti. On her return to new Zealand she continued to work at trentham, but her own health suffered and she came down with a rheumatic condition.
During her convalescence she travelled, ending up in Britain in 1917. Here she visited child welfare institutions, and became acutely aware of the problems of child malnutrition. On returning to New Zealand she rejoined the school medical service, serving in the southwestern North Island. During her time in this service, based at Wanganui, she became a much feared but much respected character. Her strength of character and certitude had become strengthened by her time in the military, yet her passion for children's health was equally marked. She was also an innovator, introducing regular "toothbrush drill" at schools and promoting the introduction of daily milk drinks for pupils.
Gunn's most notable contribution to children's health was the inauguration of the Children's Health Camp movement. Based on the system of open-air schools used in britain to aid tuberculosis sufferers, Gunn proposed to Wanganui Hospital Board member B.P. Lethbridge that a simplified system of camps for malnourished children would improve child health. She and Lethbridge had a wager as to the success of such a scheme, and Gunn set about using her persuasive powers in gaining the necessary equipment to open a camp. In November 1919 a group of 55 children arrived at Turakina to spend three weeks under the supervision of Gunn a,d a small group of school nurses and teacher trainees. The camp was a remarkable siuccess. Gunn continued to personally organise and run camps throughout the 1920s, at Turakina and later at Awapuni, Palmerston North. Camps were organised on a military-like schedule, creating an atmosphere that was somewhere between an open-air hospital and a scout camp. Other voluntary health camps started up, and in 1936, a National Federation of Health Camps was imaugurated, with permanent, year-round facilities and substantial government subsidies, some of these coming through the sale of health stamps, postage stamps with a set charity premium which went towards the running of the camps.
Between 1937 and 1940, Gunn served as director of the Health Department's Division of School Hygiene. After retiring from the post she continued to be interested and to work in the fields of child health and paediatrics. Gunn was awarded an MBE in 1951 for her work in child health. Elizabeth Gunn died at Ranui rest home in Wellington on 26 October, 1963.